The fisherman and his wife 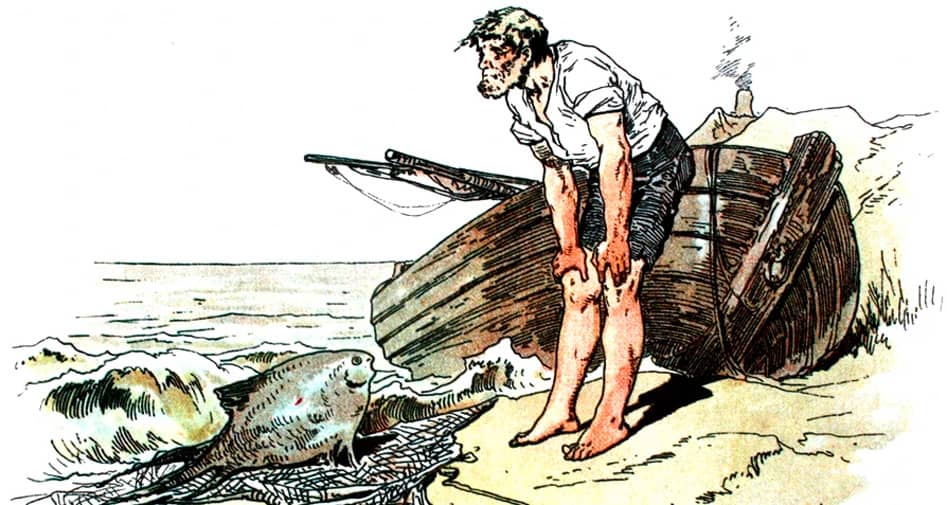 The fisherman and his wife - Fairy Tale by the Brothers Grimm

There was once a fisherman and his wife who lived together in a hovel by the sea-shore, and the fisherman went out every day with his hook and line to catch fish, and he angled and angled.

One day he was sitting with his rod and looking into the clear water, and he sat and sat.

At last down went the line to the bottom of the water, and when he drew it up he found a great flounder on the hook. And the flounder said to him, „Fisherman, listen to me; let me go, I am not a real fish but an enchanted prince. What good shall I be to you if you land me? I shall not taste well; so put me back into the water again, and let me swim away.“

„Well,“ said the fisherman, „no need of so many words about the matter, as you can speak I had much rather let you swim away.“ 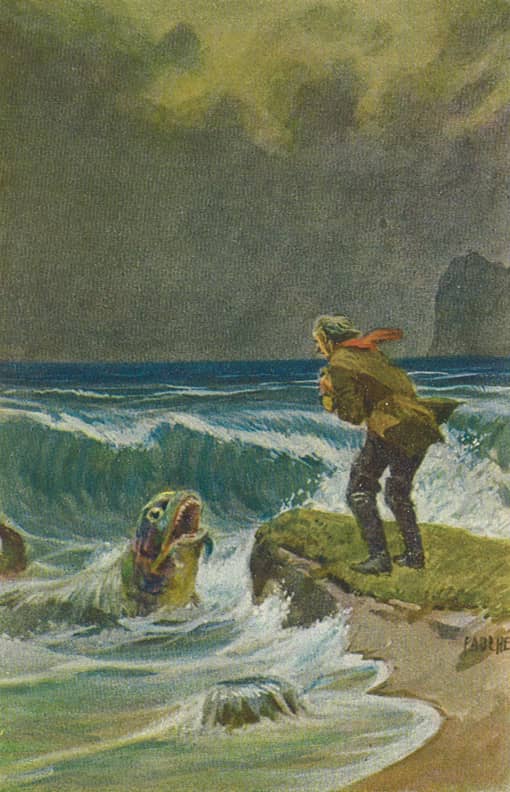 Then he put him back into the clear water, and the flounder sank to the bottom, leaving a long streak of blood behind him. Then the fisherman got up and went home to his wife in their hovel.
„Well, husband,“ said the wife, „have you caught nothing to-day?“
„No,“ said the man „that is, I did catch a flounder, but as he said he was an enchanted prince, I let him go again.“
„Then, did you wish for nothing?“said the wife.
„No,“ said the man; „what should I wish for?“
„Oh dear!“ said the wife; „and it is so dreadful always to live in this evil-smelling hovel j you might as well have wished for a little cottage; go again and call him; tell him we want a little cottage, I daresay he will give it us; go, and be quick.“
And when he went back, the sea was green and yellow, and not nearly so clear. So he stood and said,
„O man, O man!-if man you be, Or flounder, flounder, in the sea- Such a tiresome wife I’ve got, For she wants what I do not.“
Then the flounder came swimming up, and said,
„Now then, what does she want?“
„Oh,“ said the man, „you know when I caught you my wife says I ought to have wished for something. She does not want to live any longer in the hovel, and would rather have a cottage.
„Go home with you,“ said the flounder, „she has it already.“
So the man went home, and found, instead of the hovel, a little cottage, and his wife was sitting on a bench before the door. And she took him by the hand, and said to him,
„Come in and see if this is not a great improvement.“
So they went in, and there was a little house-place and a beautiful little bedroom, a kitchen and larder, with all sorts of furniture, and iron and brass ware of the very best. And at the back was a little yard with fowls and ducks, and a little garden full of green vegetables and fruit.
„Look,“ said the wife, „is not that nice?“
„Yes,“ said the man, „if this can only last we shall be very well contented.“
„We will see about that,“ said the wife. And after a meal they went to bed.
So all went well for a week or fortnight, when the wife said,
„Look here, husband, the cottage is really too confined, and the yard and garden are so small; I think the flounder had better get us a larger house; I should like very much to live in a large stone castle; so go to your fish and he will send us a castle.“
„0 my dear wife,“ said the man, „the cottage is good enough; what do we want a castle for?“
„We want one,“ said the wife; „go along with you; the flounder can give us one.“
„Now, wife,“ said the man, „the flounder gave us the cottage; I do not like to go to him again, he may be angry.“
„Go along,“ said the wife, „he might just as well give us it as not; do as I say!“
The man felt very reluctant and unwilling; and he said to himself,
„It is not the right thing to do;“ nevertheless he went.
So when he came to the seaside, the water was purple and dark blue and grey and thick, and not green and yellow as before. And he stood and said,
„O man, O man!-if man you be, Or flounder, flounder, in the sea- Such a tiresome wife I’ve got, For she wants what I do not.“
„Now then, what does she want?“said the flounder.
„Oh,“ said the man, half frightened, „she wants to live in a large stone castle.“
„Go home with you, she is already standing before the door,“ said the flounder. 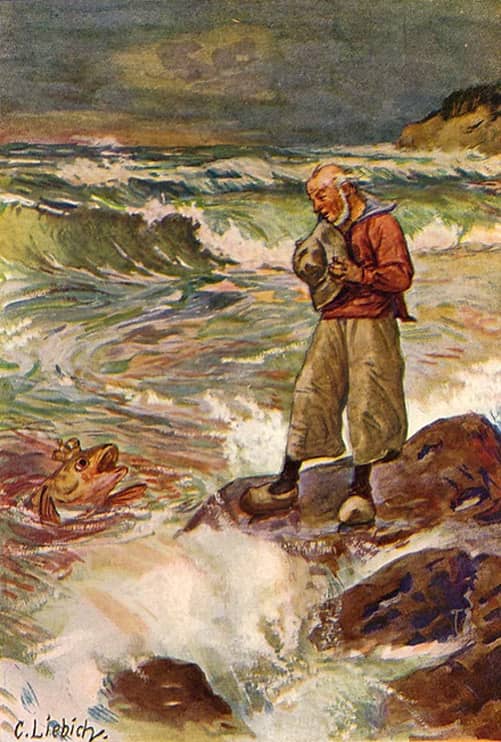 Then the man went home, as he supposed, but when he got there, there stood in the place of the cottage a great castle of stone, and his wife was standing on the steps, about to go in; so she took him by the hand, and said,
„Let us enter.“
With that he went in with her, and in the castle was a great hall with a marble- pavement, and there were a great many servants, who led them through large doors, and the passages were decked with tapestry, and the rooms with golden chairs and tables, and crystal chandeliers hanging from the ceiling; and all the rooms had carpets. 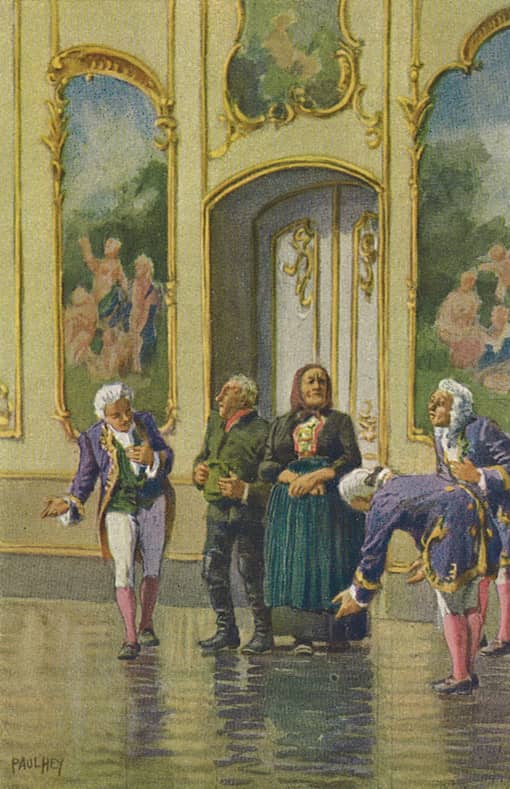 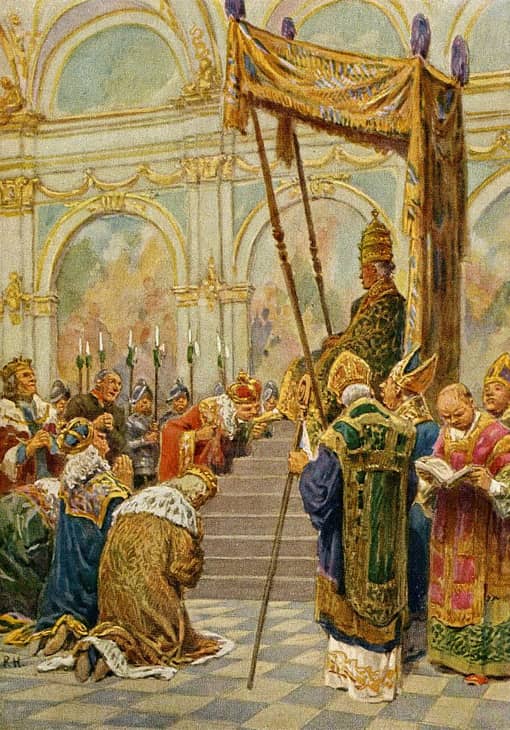 „Husband,“ said she, „no more words about it; I must and will be pope; so go along to the fish.“
„Now, wife,“ said the man, „how can I ask him such a thing? it is too bad-it is asking a little too much; and, besides, he could not do it.“
„What rubbish!“ said the wife; “ if he could make me emperor he can make me pope. Go along and ask him; I am emperor, and you are only my husband, so go you must.“
So he went, feeling very frightened, and he shivered and shook, and his knees trembled; and there arose a great wind, and the clouds flew by, and it grew very dark, and the sea rose mountains high, and the ships were tossed about, and the sky was partly blue in the middle, but at the sides very dark and red, as in a great tempest. And he felt very desponding, and stood trembling and said,
„O man, O man!-if man you be, Or flounder, flounder, in the sea- Such a tiresome wife I’ve got, For she wants what I do not.“
„Well, what now?“ said the fish.
„Oh dear!“ said the man, „she wants to be pope.“
„Go home with you, she is pope already,“ said the fish.
So he went home, and he found himself before a great church, with palaces all round. He had to make his way through a crowd of people; and when he got inside he found the place lighted up with thousands and thousands of lights; and his wife was clothed in a golden garment, and sat upon a very high throne, and had three golden crowns on, all in the greatest priestly pomp; and on both sides of her there stood two rows of lights of all sizes-from the size of the longest tower to the smallest rushlight, and all the emperors and kings were kneeling before her and kissing her foot. 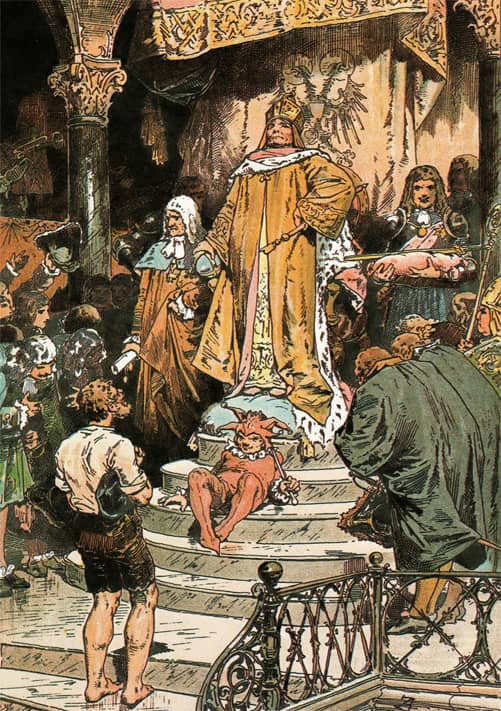 „Well, wife,“ said the man, and sat and stared at her, „so you are pope.“
„Yes,“ said she, „now I am pope!“
And he went on gazing at her till he felt dazzled, as if he were sitting in the sun. And after a little time he said,
„Well, now, wife, what is there left to be, now you are pope?“
And she sat up very stiff and straight, and said nothing.
And he said again, „Well, wife, I hope you are contented at last with being pope; you can be nothing more.“
„We will see about that,“ said the wife. With that they both went to bed; but she was as far as ever from being contented, and she could not get to sleep for thinking of what she should like to be next.
The husband, however, slept as fast as a top after his busy day; but the wife tossed and turned from side to side the whole night through, thinking all the while what she could be next, but nothing would occur to her; and when she saw the red dawn she slipped off the bed, and sat before the window to see the sun rise, and as it came up she said,
„Ah, I have it! what if I should make the sun and moon to rise-husband!“she cried, and stuck her elbow in his ribs, „wake up, and go to your fish, and tell him T want power over the sun and moon.“
The man was so fast asleep that when he started up he fell out of bed. Then he shook himself together, and opened his eyes and said,
„Oh,-wife, what did you say?“
„Husband,“ said she, „if I cannot get the power of making the sun and moon rise when I want them, I shall never have another quiet hour. Go to the fish and tell him so.“
„O wife!“ said the man, and fell on his knees to her, „the fish can really not do that for you. I grant you he could make you emperor and pope; do be contented with that, I beg of you.“
And she became wild with impatience, and screamed out,
„I can wait no longer, go at once!“
And so off he went as well as he could for fright. And a dreadful storm arose, so that he could hardly keep his feet; and the houses and trees were blown down, and the mountains trembled, and rocks fell in the sea; the sky was quite black, and it thundered and lightened; and the waves, crowned with foam, ran mountains high. So he cried out, without being able to hear his own words,
„O man, O man!-if man you be, Or flounder, flounder, in the sea- Such a tiresome wife I’ve got, For she wants what I do not.“
„Well, what now?“ said the flounder.
„Oh dear!“ said the man, „she wants to order about the sun and moon.“
„Go home with you!“said the flounder, „you will find her in the old hovel.“
And there they are sitting to this very day.

Questions, comments or experience reports?
« The Straw, the Coal, and the Bean
The Brave Little Tailor »
Search
Fairy tale of the month