The Frog King or Iron Heinrich 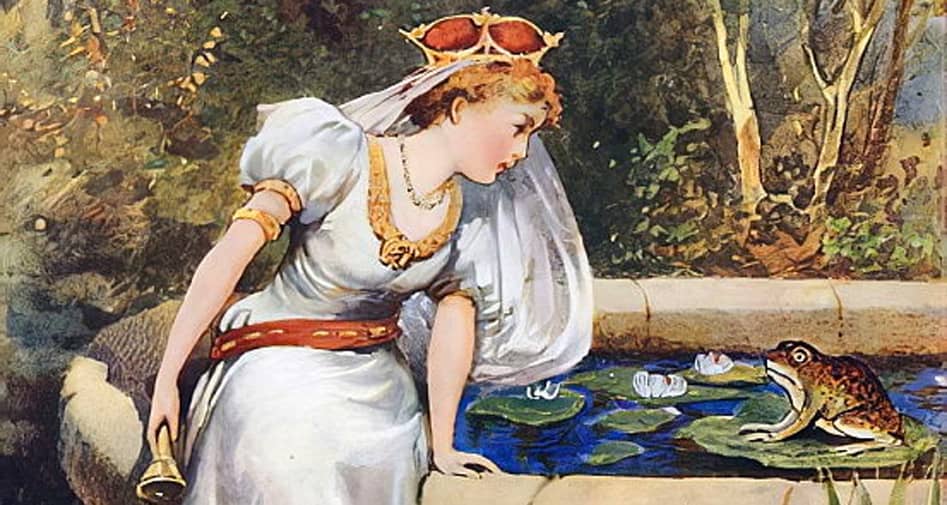 In the old times, when it was still of some use to wish for the thing one wanted, there lived a King whose daughters were all handsome, but the youngest was so beautiful that the sun himself, who has seen so much, wondered each time he shone over her because of her beauty. Near the royal castle there was a great dark wood, and in the wood under an old linden-tree was a well; and when the day was hot, the King’s daughter used to go forth into the wood and sit by the brink of the cool well, and if the time seemed long, she would take out a golden ball, and throw it up and catch it again, and this was her favourite pastime. 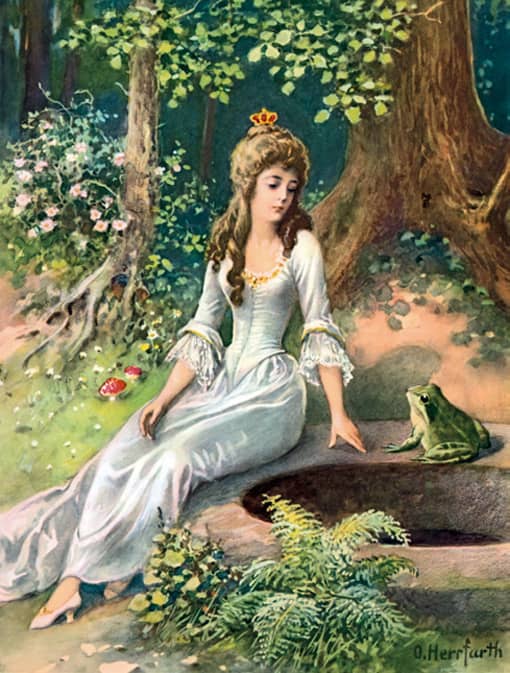 Now it happened one day that the golden ball, instead of falling back into the maiden’s little hand which had sent it aloft, dropped to the ground near the edge of the well and rolled in. The king’s daughter followed it with her eyes as it sank, but the well was deep, so deep that the bottom could not be seen. Then she began to weep, and she wept and wept as if she could never be comforted. And in the midst of her weeping she heard a voice saying to her: „What ails thee, king’s daughter? Thy tears would melt a heart of stone.“ And when she looked to see where the voice came from, there was nothing but a frog stretching his thick ugly head out of the water. „Oh, is it you, old waddler?“ said she, „I weep because my golden ball has fallen into the well.“ – „Never mind, do not weep,“ answered the frog, „I can help you; but what will you give me if I fetch up your ball again?“ – „Whatever you like, dear frog,“ said she, „any of my clothes, my pearls and jewels, or even the golden crown that I wear.“ – „Thy clothes, thy pearls and jewels, and thy golden crown are not for me,“ answered the frog, „but if thou wouldst love me, and have me for thy companion and play-fellow, and let me sit by thee at table, and eat from thy plate, and drink from thy cup, and sleep in thy little bed, if thou wouldst promise all this, then would I dive below the water and fetch thee thy golden ball again.“ – „Oh yes,“ she answered, „I will promise it all, whatever you want, if you will only get me my ball again.“ But she thought to herself: What nonsense he talks! As if he could do anything but sit in the water and croak with the other frogs, or could possibly be any one’s companion.

But the frog, as soon as he heard her promise, drew his head under the water and sank down out of sight, but after a while he came to the surface again with the ball in his mouth, and he threw it on the grass. The King’s daughter was overjoyed to see her pretty plaything again, and she caught it up and ran off with it. „Stop, stop!“ cried the frog, „take me up too. I cannot run as fast as you!“ But it was of no use, for croak, croak after her as he might, she would not listen to him, but made haste home, and very soon forgot all about the poor frog, who had to betake himself to his well again.

The next day, when the King’s daughter was sitting at table with the King and all the court, and eating from her golden plate, there came something pitter patter up the marble stairs, and then there came a knocking at the door, and a voice crying: „Youngest King’s daughter, let me in!“ And she got up and ran to see who it could be, but when she opened the door, there was the frog sitting outside. Then she shut the door hastily and went back to her seat, feeling very uneasy. 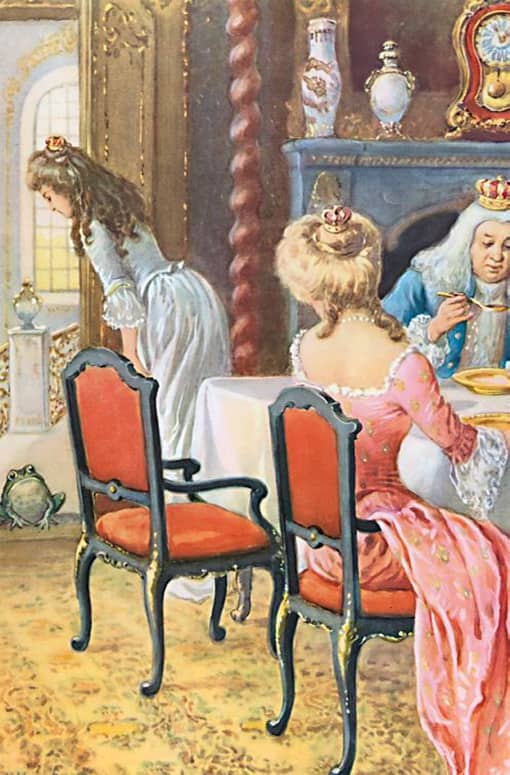 The King noticed how quickly her heart was beating, and said: „My child, what are you afraid of? Is there a giant standing at the door ready to carry you away?“ – „Oh no,“ answered she, „no giant, but a horrid frog.“ – „And what does the frog want?“ asked the King. „O dear father,“ answered she, „when I was sitting by the well yesterday, and playing with my golden ball, it fell into the water, and while I was crying for the loss of it, the frog came and got it again for me on condition I would let him be my companion, but I never thought that he could leave the water and come after me; but now there he is outside the door, and he wants to come in to me.“ And then they all heard him knocking the second time and crying:

„That which thou hast promised must thou perform,“ said the King, „so go now and let him in.“ So she went and opened the door, and the frog hopped in, following at her heels, till she reached her chair. Then he stopped and cried: „Lift me up to sit by you.“ But she delayed doing so until the King ordered her. When once the frog was on the chair, he wanted to get on the table, and there he sat and said: „Now push your golden plate a little nearer, so that we may eat together.“ And so she did, but everybody might see how unwilling she was, and the frog feasted heartily, but every morsel seemed to stick in her throat. „I have had enough now,“ said the frog at last, „and as I am tired, you must carry me to your room, and make ready your silken bed, and we will lie down and go to sleep.“ 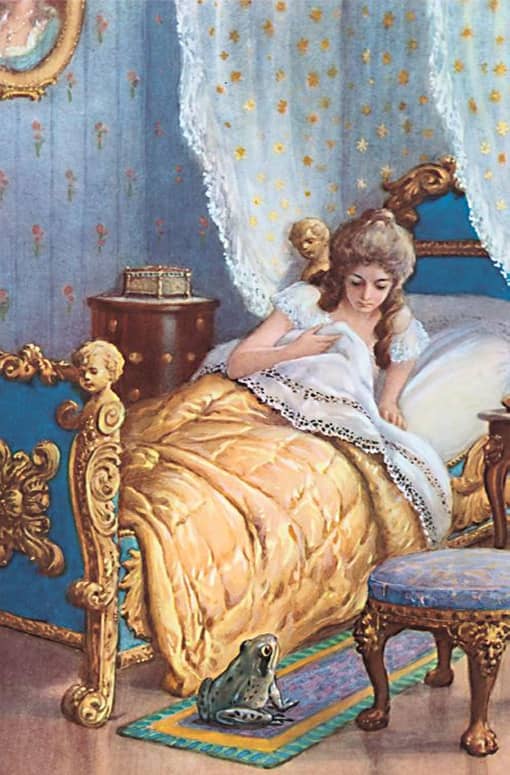 Then the King’s daughter began to weep, and was afraid of the cold frog, that nothing would satisfy him but he must sleep in her pretty clean bed. Now the King grew angry with her, saying: „That which thou hast promised in thy time of necessity, must thou now perform.“ So she picked up the frog with her finger and thumb, carried him upstairs and put him in a corner, and when she had lain down to sleep, he came creeping up, saying: „I am tired and want sleep as much as you; take me up, or I will tell your father.“ Then she felt beside herself with rage, and picking him up, she threw him with all her strength against the wall, crying: „Now will you be quiet, you horrid frog!“ 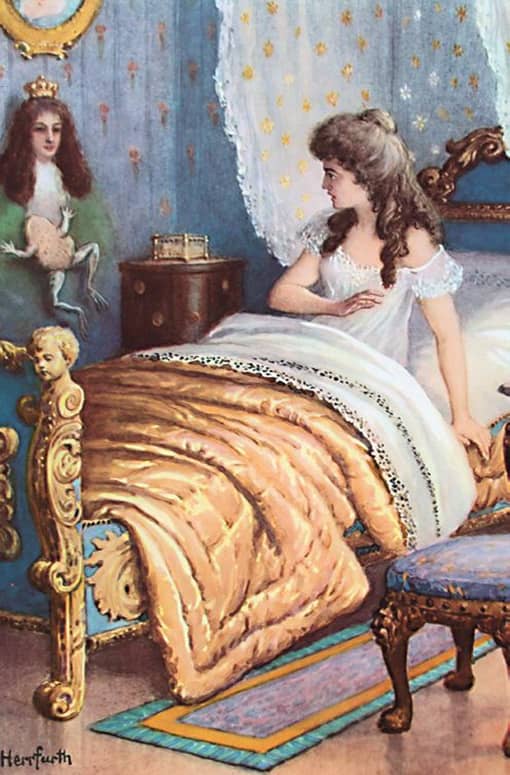 But as he fell, he ceased to be a frog, and became all at once a prince with beautiful kind eyes. And it came to pass that, with her father’s consent, they became bride and bridegroom. And he told her how a wicked witch had bound him by her spells, and how no one but she alone could have released him, and that they two would go together to his father’s kingdom. And there came to the door a carriage drawn by eight white horses, with white plumes on their heads, and with golden harness, and behind the carriage was standing faithful Henry, the servant of the young prince. Now, faithful Henry had suffered such care and pain when his master was turned into a frog, that he had been obliged to wear three iron bands over his heart, to keep it from breaking with trouble and anxiety. When the carriage started to take the prince to his kingdom, and faithful Henry had helped them both in, he got up behind, and was full of joy at his master’s deliverance.

And when they had gone a part of the way, the prince heard a sound at the back of the carriage, as if something had broken, and he turned round and cried:

„Henry, the wheel must be breaking!“
„The wheel does not break,
‚Tis the band round my heart
That, to lessen its ache,
When I grieved for your sake,
I bound round my heart.“

Again, and yet once again there was the same sound, and the prince thought it must be the wheel breaking, but it was the breaking of the other bands from faithful Henry’s heart, because it was now so relieved and happy.

Questions, comments or experience reports?
Cat and Mouse in Partnership »
Search
Fairy tale of the month