The Wolf and the Seven Young Goats 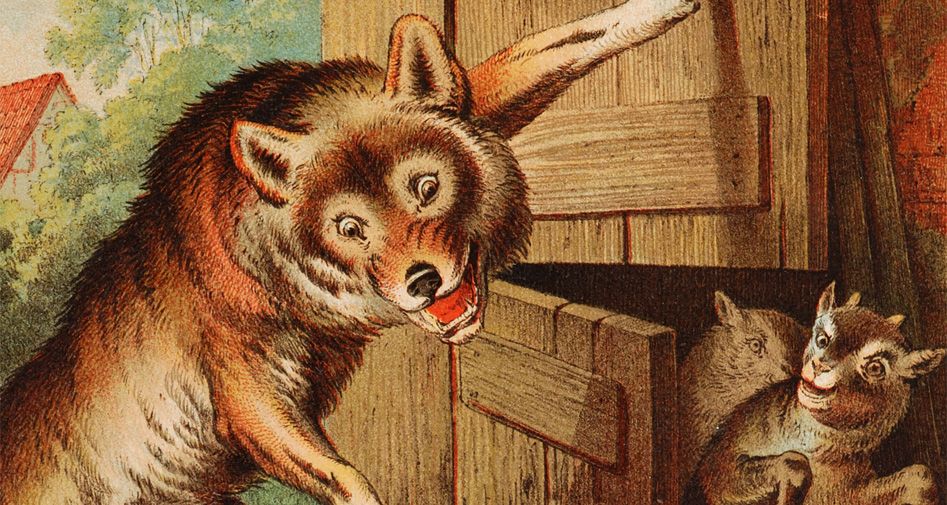 There was once an old goat who had seven little ones, and was as fond of them as ever mother was of her children. One day she had to go into the wood to fetch food for them, so she called them all round her. „Dear children,“ said she, „I am going out into the wood; and while I am gone, be on your guard against the wolf, for if he were once to get inside he would eat you up, skin, bones, and all. The wretch often disguises himself, but he may always be known by his hoarse voice and black paws.“ 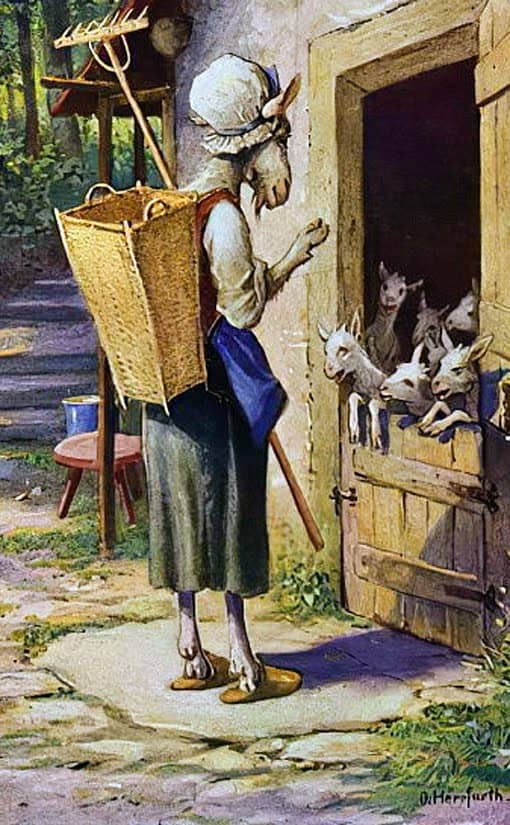 „Dear mother,“ answered the kids, „you need not be afraid, we will take good care of ourselves.“ And the mother bleated good-bye, and went on her way with an easy mind. 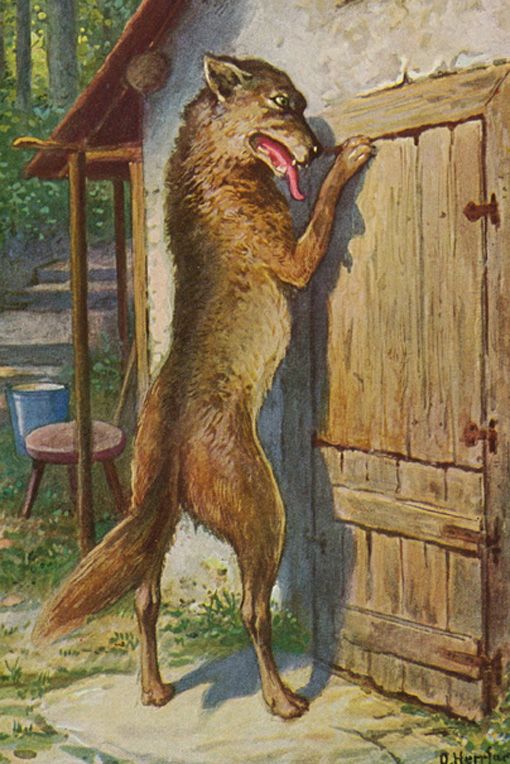 But the wolf had put up his black paws against the window, and the kids seeing this, cried out, „We will not open the door; our mother has no black paws like you; you must be the wolf.“ The wolf then ran to a baker. „Baker,“ said he, „I am hurt in the foot; pray spread some dough over the place.“ And when the baker had plastered his feet, he ran to the miller. „Miller,“ said he, „strew me some white meal over my paws.“ But the miller refused, thinking the wolf must be meaning harm to some one. „If you don’t do it,“ cried the wolf, „I’ll eat you up!“ And the miller was afraid and did as he was told. And that just shows what men are.

And now came the rogue the third time to the door and knocked. „Open, children!“ cried he. „Your dear mother has come home, and brought you each something from the wood.“ – „First show us your paws,“ said the kids, „so that we may know if you are really our mother or not.“ And he put up his paws against the window, and when they saw that they were white, all seemed right, and they opened the door. 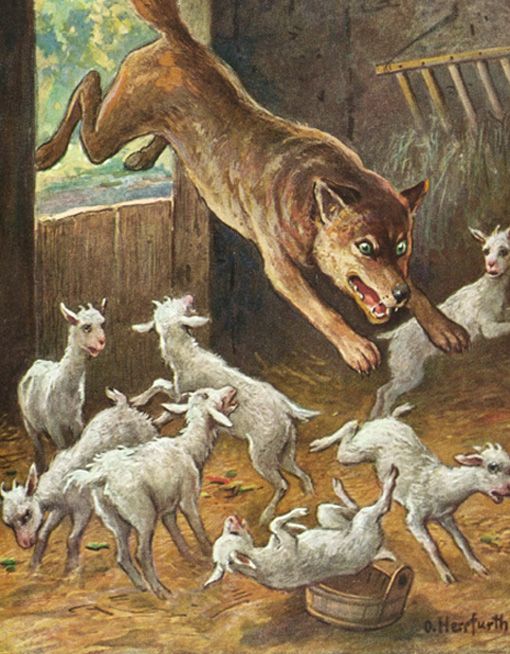 And when he was inside they saw it was the wolf, and they were terrified and tried to hide themselves. One ran under the table, the second got into the bed, the third into the oven, the fourth in the kitchen, the fifth in the cupboard, the sixth under the sink, the seventh in the clock-case. But the wolf found them all, and gave them short shrift; one after the other he swallowed down, all but the youngest, who was hid in the clock-case. And so the wolf, having got what he wanted, strolled forth into the green meadows, and laying himself down under a tree, he fell asleep.

Not long after, the mother goat came back from the wood; and, oh! what a sight met her eyes! the door was standing wide open, table, chairs, and stools, all thrown about, dishes broken, quilt and pillows torn off the bed. She sought her children, they were nowhere to be found. She called to each of them by name, but nobody answered, until she came to the name of the youngest. „Here I am, mother,“ a little voice cried, „here, in the clock case.“ And so she helped him out, and heard how the wolf had come, and eaten all the rest. And you may think how she cried for the loss of her dear children.

At last in her grief she wandered out of doors, and the youngest kid with her; and when they came into the meadow, there they saw the wolf lying under a tree, and snoring so that the branches shook. 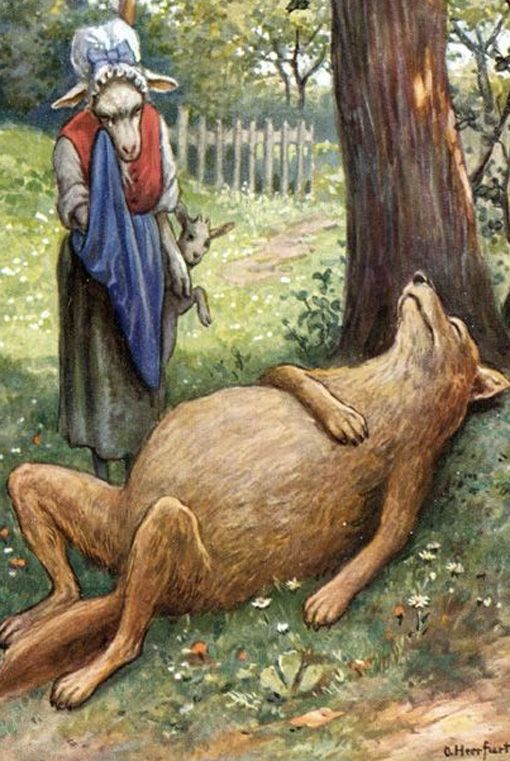 The mother goat looked at him carefully on all sides and she noticed how something inside his body was moving and struggling. Dear me! thought she, can it be that my poor children that he devoured for his evening meal are still alive? And she sent the little kid back to the house for a pair of shears, and needle, and thread. Then she cut the wolf’s body open, and no sooner had she made one snip than out came the head of one of the kids, and then another snip, and then one after the other the six little kids all jumped out alive and well, for in his greediness the rogue had swallowed them down whole. 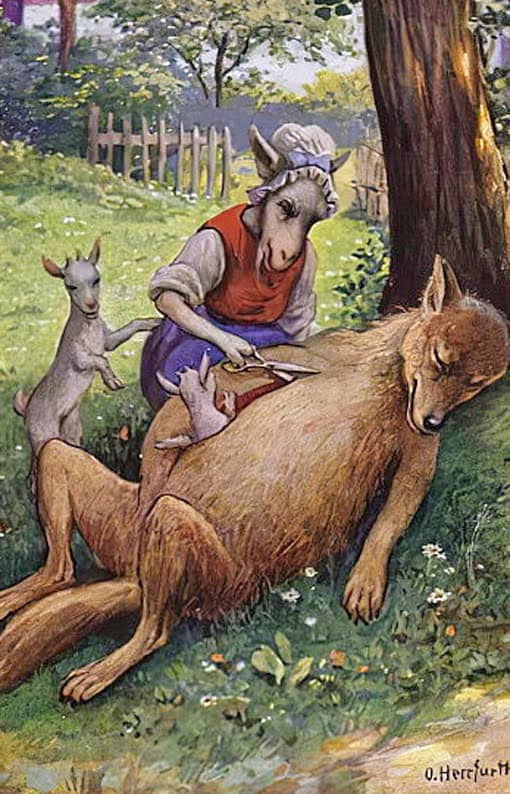 How delightful this was! so they comforted their dear mother and hopped about like tailors at a wedding. „Now fetch some good hard stones,“ said the mother, „and we will fill his body with them, as he lies asleep.“ And so they fetched some in all haste, and put them inside him, and the mother sewed him up so quickly again that he was none the wiser.

When the wolf at last awoke, and got up, the stones inside him made him feel very thirsty, and as he was going to the brook to drink, they struck and rattled one against another. And so he cried out:

„What is this I feel inside me
Knocking hard against my bones?
How should such a thing betide me!
They were kids, and now they’re stones.“

So he came to the brook, and stooped to drink, but the heavy stones weighed him down, so he fell over into the water and was drowned. 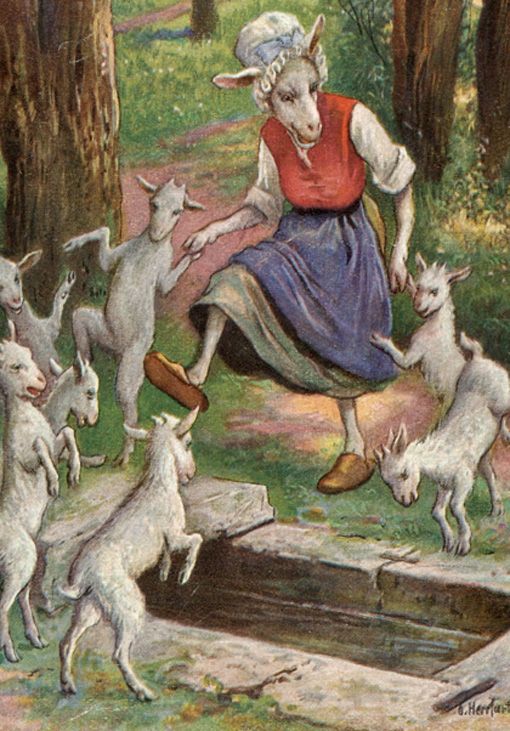 they cried, and taking hands, they danced with their mother all about the place.

Questions, comments or experience reports?
« The story of the youth who went forth to learn what fear was
Trusty John »
Search
Fairy tale of the month