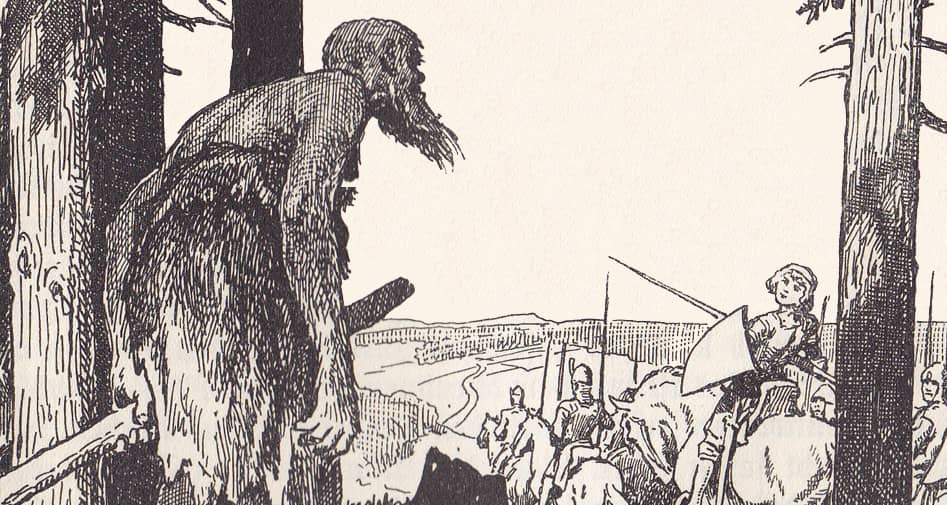 The next day Rock-splitter stayed at home, and he fared just as Fir-twister had done, he was very ill-treated by the dwarf because he was not willing to give him any meat. When the others came home in the evening, Fir-twister easily saw what he had suffered, but both kept silence, and thought, „Hans also must taste some of that soup.“

Hans, who had to stay at home the next day, did his work in the kitchen as it had to be done, and as he was standing skimming the pan, the dwarf came and without more ado demanded a bit of meat. Then Hans thought, „He is a poor wretch, I will give him some of my share, that the others may not run short,“ and handed him a bit. When the dwarf had devoured it, he again asked for some meat, and good-natured Hans gave it to him, and told him it was a handsome piece, and that he was to be content with it. But the dwarf begged again for the third time. „Thou art shameless!“ said Hans, and gave him none. Then the malicious dwarf wanted to spring on him and treat him as he had treated Fir-twister and Rock-splitter, but he had got to the wrong man. Hans, without exerting himself much, gave him a couple of blows which made him jump down the castle steps. Hans was about to run after him, but fell right over him, for he was so tall. When he rose up again, the dwarf had got the start of him. Hans hurried after him as far as the forest, and saw him slip into a hole in the rock. Hans now went home, but he had marked the spot. When the two others came back, they were surprised that Hans was so well. He told them what had happened, and then they no longer concealed how it had fared with them. Hans laughed and said, „It served you quite right; why were you so greedy with your meat? It is a disgrace that you who are so big should have let yourselves be beaten by the dwarf.“ Thereupon they took a basket and a rope, and all three went to the hole in the rock into which the dwarf had slipped, and let Hans and his club down in the basket. When Hans had reached the bottom, he found a door, and when he opened it a maiden was sitting there who was lovely as any picture, nay, so beautiful that no words can express it, and by her side sat the dwarf and grinned at Hans like a sea-cat! She, however, was bound with chains, and looked so mournfully at him that Hans felt great pity for her, and thought to himself, „Thou must deliver her out of the power of the wicked dwarf,“ and gave him such a blow with his club that he fell down dead. Immediately the chains fell from the maiden, and Hans was enraptured with her beauty. She told him she was a King’s daughter whom a savage count had stolen away from her home, and imprisoned there among the rocks, because she would have nothing to say to him. The count had, however, set the dwarf as a watchman, and he had made her bear misery and vexation enough. And now Hans placed the maiden in the basket and had her drawn up; the basket came down again, but Hans did not trust his two companions, and thought, „They have already shown themselves to be false, and told me nothing about the dwarf; who knows what design they may have against me?“ So he put his club in the basket, and it was lucky he did; for when the basket was half-way up, they let it fall again, and if Hans had really been sitting in it he would have been killed. But now he did not know how he was to work his way out of the depths, and when he turned it over and over in his mind he found no counsel. „It is indeed sad,“ said he to himself, „that I have to waste away down here,“ and as he was thus walking backwards and forwards, he once more came to the little chamber where the maiden had been sitting, and saw that the dwarf had a ring on his finger which shone and sparkled. Then he drew it off and put it on, and when he turned it round on his finger, he suddenly heard something rustle over his head. He looked up and saw spirits of the air hovering above, who told him he was their master, and asked what his desire might be? Hans was at first struck dumb, but afterwards he said that they were to carry him above again. They obeyed instantly, and it was just as if he had flown up himself. When, however, he was above again, he found no one in sight. Fir-twister and Rock-splitter had hurried away, and had taken the beautiful maiden with them. But Hans turned the ring, and the spirits of the air came and told him that the two were on the sea. Hans ran and ran without stopping, until he came to the sea-shore, and there far, far out on the water, he perceived a little boat in which his faithless comrades were sitting; and in fierce anger he leapt, without thinking what he was doing, club in hand into the water, and began to swim, but the club, which weighed a hundredweight, dragged him deep down until he was all but drowned. Then in the very nick of time he turned his ring, and immediately the spirits of the air came and bore him as swift as lightning into the boat. He swung his club and gave his wicked comrades the reward they merited and threw them into the water, and then he sailed with the beautiful maiden, who had been in the greatest alarm, and whom he delivered for the second time, home to her father and mother, and married her, and all rejoiced exceedingly.

Questions, comments or experience reports?
« The griffin
The peasant in heaven »
Search
Fairy tale of the month