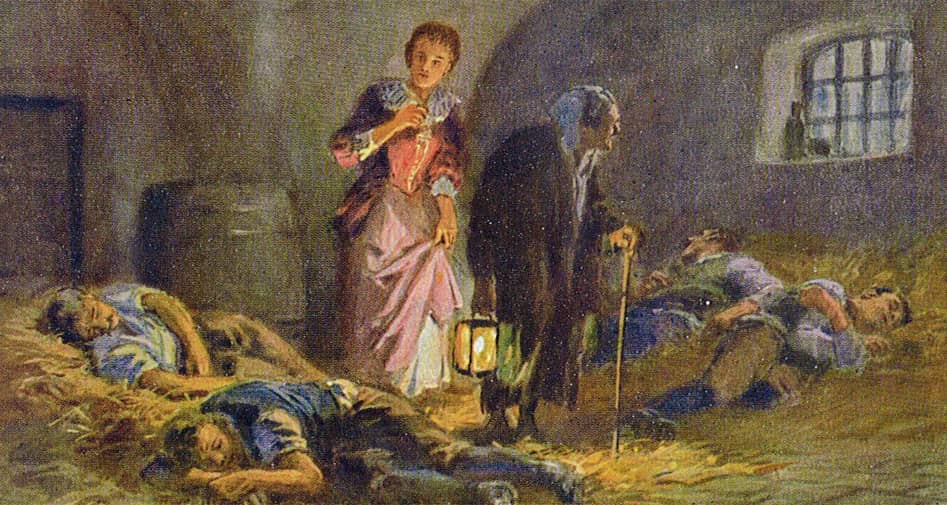 The Robber Bridegroom - Fairy Tale by the Brothers Grimm

Attention: This is a scary story.

There was once a miller who had a beautiful daughter, and when she was grown up he became anxious that she should be well married and taken care of; so he thought, „If a decent sort of man comes and asks her in marriage, I will give her to him.“ Soon after a suitor came forward who seemed very well to do, and as the miller knew nothing to his disadvantage, he promised him his daughter. But the girl did not seem to love him as a bride should love her bridegroom; she had no confidence in him; as often as she saw him or thought about him, she felt a chill at her heart. One day he said to her, „You are to be my bride, and yet you have never been to see me.“ The girl answered, „I do not know where your house is.“ Then he said, „My house is a long way in the wood.“ She began to make excuses, and said she could not find the way to it; but the bridegroom said, „You must come and pay me a visit next Sunday; I have already invited company, and I will strew ashes on the path through the wood, so that you will be sure to find it.“

When Sunday came, and the girl set out on her way, she felt very uneasy without knowing exactly why; and she filled both pockets full of peas and lentils. There were ashes strewed on the path through the wood, but, nevertheless, at each step she cast to the right and left a few peas on the ground. So she went on the whole day until she came to the middle of the wood, where it was the darkest, and there stood a lonely house, not pleasant in her eyes, for it was dismal and unhomelike.

She walked in, but there was no one there, and the greatest stillness reigned. Suddenly she heard a voice cry,

„Turn back, turn back, thou pretty bride,
Within this house thou must not bide,
For here do evil things betide.“

The girl glanced round, and perceived that the voice came from a bird who was hanging in a cage by the wall. And again it cried,

„Turn back, turn back, thou pretty bride,
Within this house thou must not bide,
For here do evil things betide.“

Then the pretty bride went on from one room into another through the whole house, but it was quite empty, and no soul to be found in it. At last she reached the cellar, and there sat a very old woman nodding her head. „Can you tell me,“ said the bride, „if my bridegroom lives here?“ – „Oh, poor child,“ answered the old woman, „do you know what has happened to you? You are in a place of cutthroats. You thought you were a bride, and soon to be married, but death will be your spouse. Look here, I have a great kettle of water to set on, and when once they have you in their power they will cut you in pieces without mercy, cook you, and eat you, for they are cannibals. Unless I have pity on you, and save you, all is over with you!“

Then the old woman hid her behind a great cask, where she could not be seen. „Be as still as a mouse,“ said she; „do not move or go away, or else you are lost. At night, when the robbers are asleep, we will escape. I have been waiting a long time for an opportunity.“ No sooner was it settled than the wicked gang entered the house. They brought another young woman with them, dragging her along, and they were drunk, and would not listen to her cries and groans. They gave her wine to drink, three glasses full, one of white wine, one of red, and one of yellow, and then they cut her in pieces. The poor bride all the while shaking and trembling when she saw what a fate the robbers had intended for her. One of them noticed on the little finger of their victim a golden ring, and as he could not draw it off easily, he took an axe and chopped it off, but the finger jumped away, and fell behind the cask on the bride’s lap. The robber took up a light to look for it, but he could not find it. Then said one of the others, „Have you looked behind the great cask?“ But the old woman cried, „Come to supper, and leave off looking till to-morrow; the finger cannot run away.“

Then the robbers said the old woman was right, and they left off searching, and sat down to eat, and the old woman dropped some sleeping stuff into their wine, so that before long they stretched themselves on the cellar floor, sleeping and snoring. When the bride heard that, she came from behind the cask, and had to make her way among the sleepers lying all about on the ground, and she felt very much afraid lest she might awaken any of them. But by good luck she passed through, and the old woman with her, and they opened the door, and they made all haste to leave that house of murderers. The wind had carried away the ashes from the path, but the peas and lentils had budded and sprung up, and the moonshine upon them showed the way. And they went on through the night, till in the morning they reached the mill. Then the girl related to her father all that had happened to her.

When the wedding-day came, the friends and neighbours assembled, the miller having invited them, and the bridegroom also appeared. When they were all seated at table, each one had to tell a story. But the bride sat still, and said nothing, till at last the bridegroom said to her, „Now, sweetheart, do you know no story? Tell us something.“ She answered, „I will tell you my dream. I was going alone through a wood, and I came at last to a house in which there was no living soul, but by the wall was a bird in a cage, who cried,

„Turn back, turn back, thou pretty bride,
Within this house thou must not bide,
For evil things do here betide.“

And then again it said it. Sweetheart, the dream is not ended. Then I went through all the rooms, and they were all empty, and it was so lonely and wretched. At last I went down into the cellar, and there sat an old old woman, nodding her head. I asked her if my bridegroom lived in that house, and she answered, ‚ Ah, poor child, you have come into a place of cut-throats; your bridegroom does live here, but he will kill you and cut you in pieces, and then cook and eat you.‘ Sweetheart, the dream is not ended. But the old woman hid me behind a great cask, and no sooner had she done so than the robbers came home, dragging with them a young woman, and they gave her to drink wine thrice, white, red, and yellow. Sweetheart, the dream is not yet ended. And then they killed her, and cut her in pieces. Sweetheart, my dream is not yet ended. And one of the robbers saw a gold ring on the finger of the young woman, and as it was difficult to get off, he took an axe and chopped off the finger, which jumped upwards, and then fell behind the great cask on my lap. And here is the finger with the ring!“ At these words she drew it forth, and showed it to the company.

The robber, who during the story had grown deadly white, sprang up, and would have escaped, but the folks held him fast, and delivered him up to justice. And he and his whole gang were, for their evil deeds, condemned and executed.

Questions, comments or experience reports?
« The Elves and the Shoemaker
Mr. Korbes »
Search
Fairy tale of the month