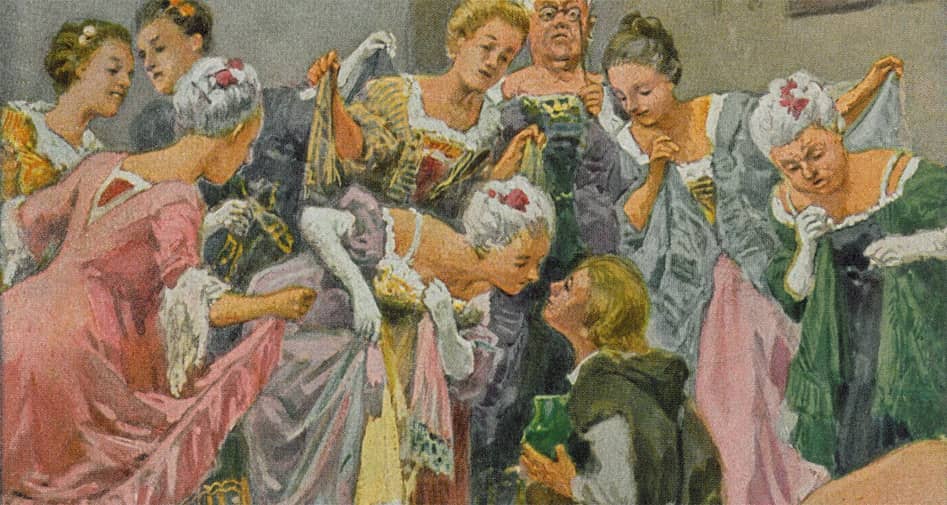 There was once a poor Prince, who had a kingdom. His kingdom was very small, but still quite large enough to marry upon; and he wished to marry.

It was certainly rather cool of him to say to the Emperor’s daughter, „Will you have me?“ But so he did; for his name was renowned far and wide; and there were a hundred princesses who would have answered, „Yes!“ and „Thank you kindly.“ We shall see what this princess said.

It happened that where the Prince’s father lay buried, there grew a rose tree–a most beautiful rose tree, which blossomed only once in every five years, and even then bore only one flower, but that was a rose! It smelt so sweet that all cares and sorrows were forgotten by him who inhaled its fragrance.

And furthermore, the Prince had a nightingale, who could sing in such a manner that it seemed as though all sweet melodies dwelt in her little throat. 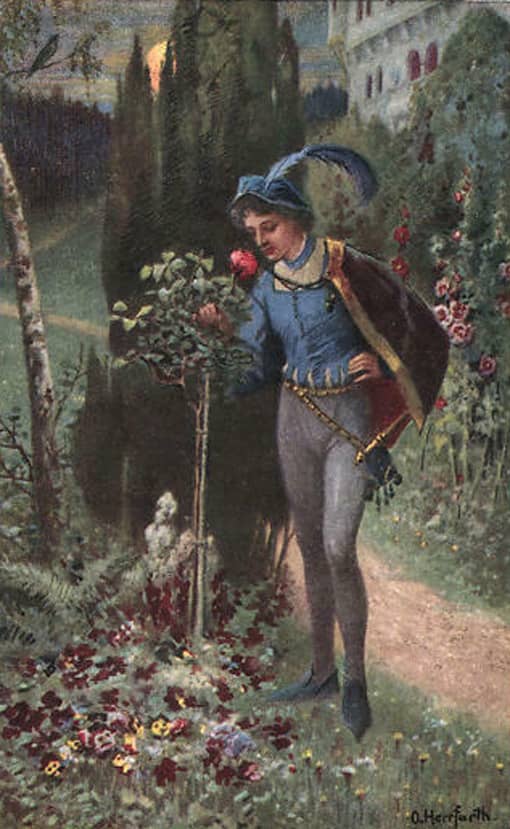 So the Princess was to have the rose, and the nightingale; and they were accordingly put into large silver caskets, and sent to her.

The Emperor had them brought into a large hall, where the Princess was playing at „Visiting,“ with the ladies of the court; and when she saw the caskets with the presents, she clapped her hands for joy.

„Ah, if it were but a little pussy-cat!“ said she; but the rose tree, with its beautiful rose came to view.

„Oh, how prettily it is made!“ said all the court ladies.

„It is more than pretty,“ said the Emperor, „it is charming!“

But the Princess touched it, and was almost ready to cry.

„Let us see what is in the other casket, before we get into a bad humor,“ said the Emperor. So the nightingale came forth and sang so delightfully that at first no one could say anything ill-humored of her.

„Superbe! Charmant!“ exclaimed the ladies; for they all used to chatter French, each one worse than her neighbor.

„How much the bird reminds me of the musical box that belonged to our blessed Empress,“ said an old knight. „Oh yes! These are the same tones, the same execution.“

„Yes! yes!“ said the Emperor, and he wept like a child at the remembrance.

„I will still hope that it is not a real bird,“ said the Princess.

„Yes, it is a real bird,“ said those who had brought it. 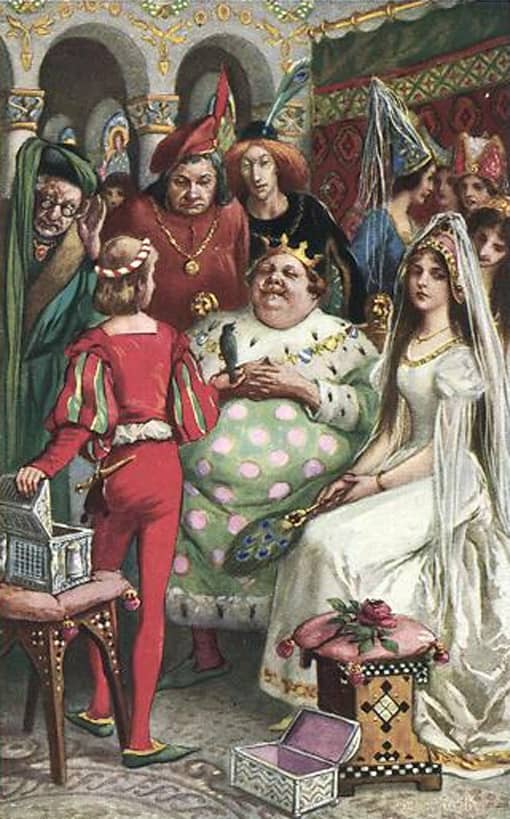 „Well then let the bird fly,“ said the Princess; and she positively refused to see the Prince.

However, he was not to be discouraged; he daubed his face over brown and black; pulled his cap over his ears, and knocked at the door.

„Good day to my lord, the Emperor!“ said he. „Can I have employment at the palace?“

„Why, yes,“ said the Emperor. „I want some one to take care of the pigs, for we have a great many of them.“

So the Prince was appointed „Imperial Swineherd.“ He had a dirty little room close by the pigsty; and there he sat the whole day, and worked. By the evening he had made a pretty little kitchen-pot. Little bells were hung all round it; and when the pot was boiling, these bells tinkled in the most charming manner, and played the old melody,

But what was still more curious, whoever held his finger in the smoke of the kitchen-pot, immediately smelt all the dishes that were cooking on every hearth in the city–this, you see, was something quite different from the rose.

Now the Princess happened to walk that way; and when she heard the tune, she stood quite still, and seemed pleased; for she could play „Lieber Augustine“; it was the only piece she knew; and she played it with one finger. 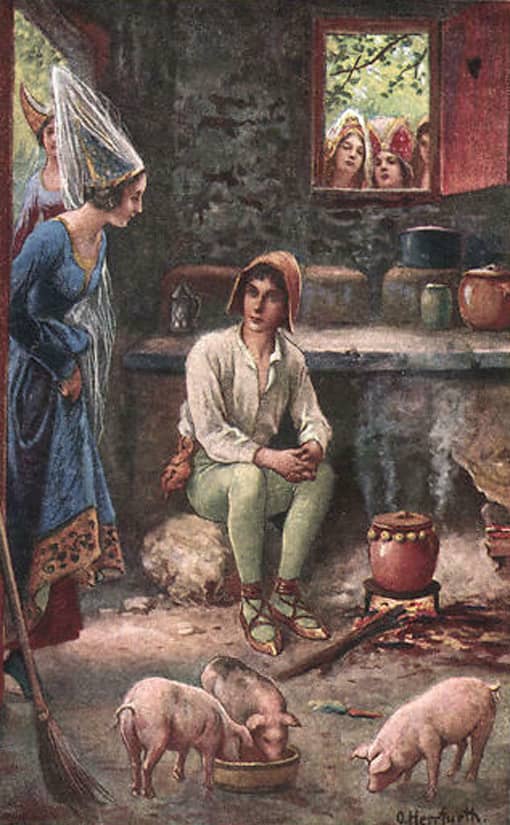 „Why there is my piece,“ said the Princess. „That swineherd must certainly have been well educated! Go in and ask him the price of the instrument.“

So one of the court-ladies must run in; however, she drew on wooden slippers first.

„What will you take for the kitchen-pot?“ said the lady.

„I will have ten kisses from the Princess,“ said the swineherd.

„I cannot sell it for less,“ rejoined the swineherd.

„He is an impudent fellow!“ said the Princess, and she walked on; but when she had gone a little way, the bells tinkled so prettily

„Stay,“ said the Princess. „Ask him if he will have ten kisses from the ladies of my court.“

„No, thank you!“ said the swineherd. „Ten kisses from the Princess, or I keep the kitchen-pot myself.“

„That must not be, either!“ said the Princess. „But do you all stand before me that no one may see us.“

And the court-ladies placed themselves in front of her, and spread out their dresses–the swineherd got ten kisses, and the Princess–the kitchen-pot.

That was delightful! The pot was boiling the whole evening, and the whole of the following day. They knew perfectly well what was cooking at every fire throughout the city, from the chamberlain’s to the cobbler’s; the court-ladies danced and clapped their hands. 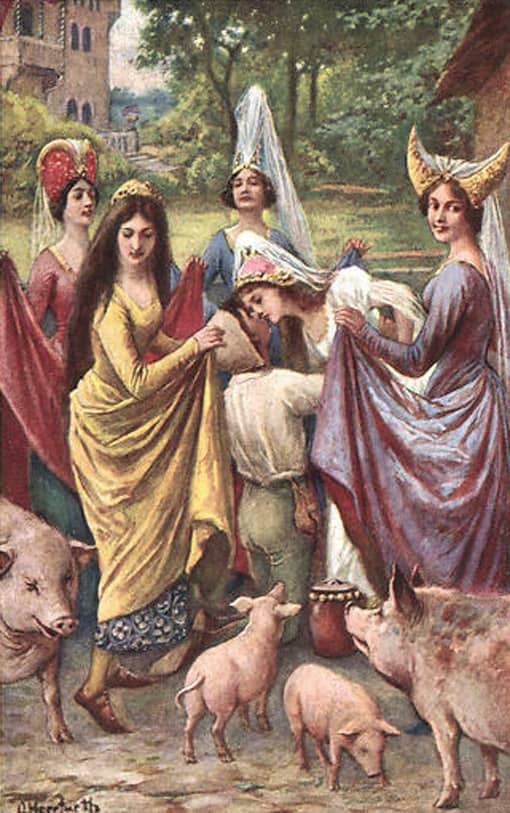 „Yes, but keep my secret, for I am an Emperor’s daughter.“

The swineherd–that is to say–the Prince, for no one knew that he was other than an ill-favored swineherd, let not a day pass without working at something; he at last constructed a rattle, which, when it was swung round, played all the waltzes and jig tunes, which have ever been heard since the creation of the world.

„Ah, that is superbe!“ said the Princess when she passed by. „I have never heard prettier compositions! Go in and ask him the price of the instrument; but mind, he shall have no more kisses!“

„He will have a hundred kisses from the Princess!“ said the lady who had been to ask.

„I think he is not in his right senses!“ said the Princess, and walked on, but when she had gone a little way, she stopped again. „One must encourage art,“ said she, „I am the Emperor’s daughter. Tell him he shall, as on yesterday, have ten kisses from me, and may take the rest from the ladies of the court.“

„Oh–but we should not like that at all!“ said they. „What are you muttering?“ asked the Princess. „If I can kiss him, surely you can. Remember that you owe everything to me.“ So the ladies were obliged to go to him again.

„A hundred kisses from the Princess,“ said he, „or else let everyone keep his own!“

„Stand round!“ said she; and all the ladies stood round her whilst the kissing was going on.

„What can be the reason for such a crowd close by the pigsty?“ said the Emperor, who happened just then to step out on the balcony; he rubbed his eyes, and put on his spectacles. „They are the ladies of the court; I must go down and see what they are about!“ So he pulled up his slippers at the heel, for he had trodden them down.

As soon as he had got into the court-yard, he moved very softly, and the ladies were so much engrossed with counting the kisses, that all might go on fairly, that they did not perceive the Emperor. He rose on his tiptoes.

„What is all this?“ said he, when he saw what was going on, and he boxed the Princess’s ears with his slipper, just as the swineherd was taking the eighty-sixth kiss.

„March out!“ said the Emperor, for he was very angry; and both Princess and swineherd were thrust out of the city. 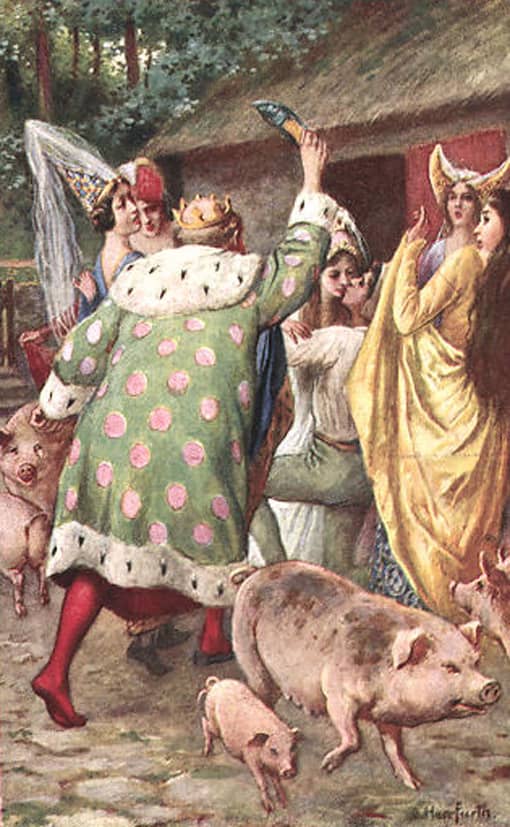 The Princess now stood and wept, the swineherd scolded, and the rain poured down.

„Alas! Unhappy creature that I am!“ said the Princess. „If I had but married the handsome young Prince! Ah! how unfortunate I am!“

And the swineherd went behind a tree, washed the black and brown color from his face, threw off his dirty clothes, and stepped forth in his princely robes; he looked so noble that the Princess could not help bowing before him.

„I am come to despise thee,“ said he. „Thou would’st not have an honorable Prince! Thou could’st not prize the rose and the nightingale, but thou wast ready to kiss the swineherd for the sake of a trumpery plaything. Thou art rightly served.“

He then went back to his own little kingdom, and shut the door of his palace in her face. Now she might well sing,

Questions, comments or experience reports?
« Ole-Luk-Oie, the Dream-God
The buckwheat »
Search
Fairy tale of the month