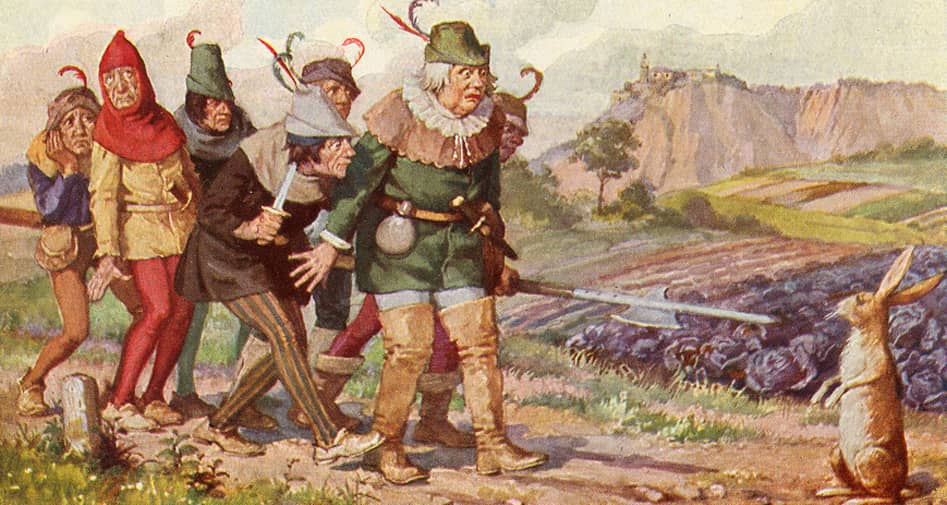 The Seven Swabians - Fairy Tale by the Brothers Grimm

Seven Swabians were once together. The first was Master Schulz; the second, Jackli; the third, Marli; the fourth, Jergli; the fifth, Michal; the sixth, Hans; the seventh, Veitli: all seven had made up their minds to travel about the world to seek adventures, and perform great deeds. But in order that they might go in security and with arms in their hands, they thought it would be advisable that they should have one solitary, but very strong, and very long spear made for them. 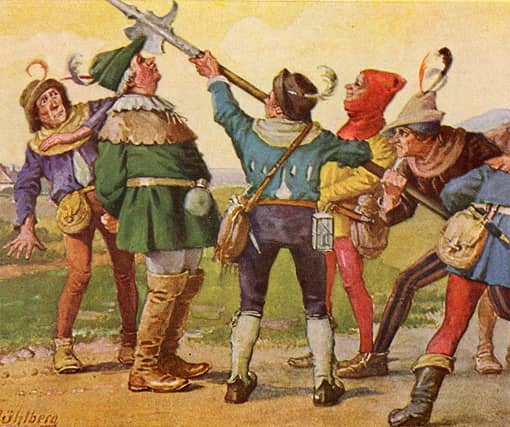 This spear all seven of them took in their hands at once; in front walked the boldest and bravest, and that was Master Schulz; all the others followed in a row, and Veitli was the last. Then it came to pass one day in the hay-making month (July), when they had walked a long distance, and still had a long way to go before they reached the village where they were to pass the night, that as they were in a meadow in the twilight a great beetle or hornet flew by them from behind a bush, and hummed in a menacing manner. Master Schulz was so terrified that he all but dropped the spear, and a cold perspiration broke out over his whole body. 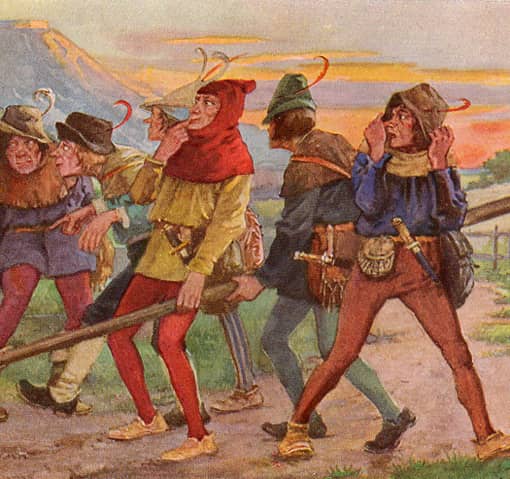 „Hark! hark!“ cried he to his comrades, „Good heavens! I hear a drum.“ Jackli, who was behind him holding the spear, and who perceived some kind of a smell, said, „Something is most certainly going on, for I taste powder and matches.“ 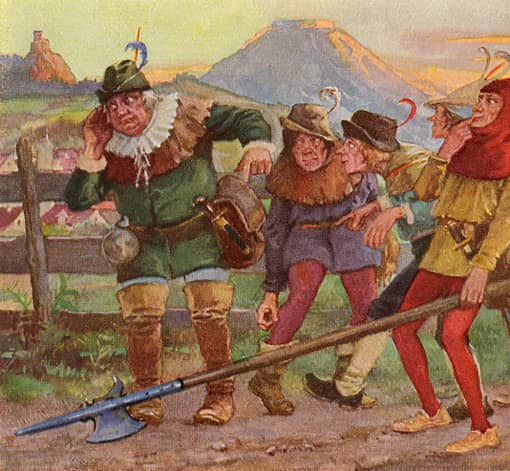 At these words Master Schulz began to take to flight, and in a trice jumped over a hedge, but as he just happened to jump on to the teeth of a rake which had been left lying there after the hay-making, the handle of it struck against his face and gave him a tremendous blow. „Oh dear! Oh dear!“ screamed Master Schulz. „Take me prisoner; I surrender! I surrender!“ 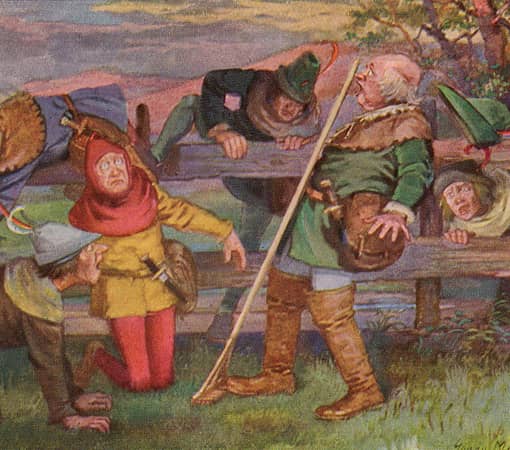 The other six all leapt over, one on the top of the other, crying, „If you surrender, I surrender too! If you surrender, I surrender too!“ At length, as no enemy was there to bind and take them away, they saw that they had been mistaken, and in order that the story might not be known, and they be treated as fools and ridiculed, they all swore to each other to hold their peace about it until one of them accidentally spoke of it. Then they journeyed onwards. The second danger which they survived cannot be compared with the first. Some days afterwards, their path led them through a fallow-field where a hare was sitting sleeping in the sun. Her ears were standing straight up, and her great glassy eyes were wide open. All of them were alarmed at the sight of the horrible wild beast, and they consulted together as to what it would be the least dangerous to do. 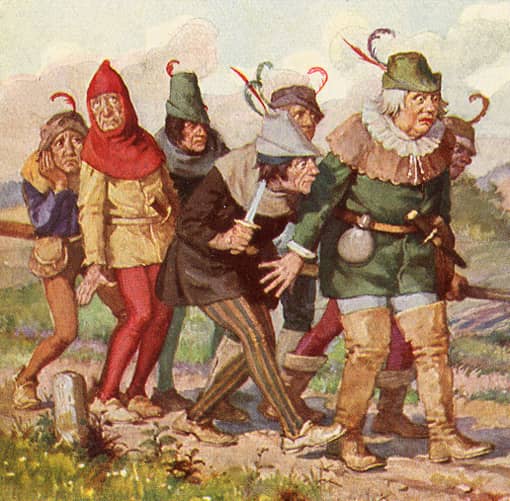 For if they were to run away, they knew that the monster would pursue and swallow them whole. So they said, „We must go through a great and dangerous struggle. Boldly ventured, is half won,“ and all seven grasped the spear, Master Schulz in front, and Veitli behind. Master Schulz was always trying to keep the spear back, but Veitli had become quite brave while behind, and wanted to dash forward and cried,

„Strike home, in every Swabian’s name,
Or else I wish ye may be lame.“

But Hans knew how to meet this, and said,

„Thunder and lightning, it’s fine to prate,
But for dragon-hunting thou’rt aye too late.“

„Nothing is wanting, not even a hair,
Be sure the Devil himself is there.“

Then it was Jergli’s turn to speak,

„If it be not, it’s at least his mother,
Or else it’s the Devil’s own step-brother.“

And now Marli had a bright thought, and said to Veitli,

„Advance, Veitli, advance, advance,
And I behind will hold the lance.“

Veitli, however, did not attend to that, and Jackli said,

„Tis Schulz’s place the first to be,
No one deserves that honor but he.“

Then Master Schulz plucked up his courage, and said, gravely,

„Then let us boldly advance to the fight,
And thus we shall show our valour and might.“

Hereupon they all together set on the dragon. Master Schulz crossed himself and prayed for God’s assistance, but as all this was of no avail, and he was getting nearer and nearer to the enemy, he screamed „Oho! oho! ho! ho! ho!“ in the greatest anguish. This awakened the hare, which in great alarm darted swiftly away. When Master Schulz saw her thus flying from the field of battle, he cried in his joy.

But the Swabian allies went in search of further adventures, and came to the Moselle, a mossy, quiet, deep river, over which there are few bridges, and which in many places people have to cross in boats. As the seven Swabians did not know this, they called to a man who was working on the opposite side of the river, to know how people contrived to get across. The distance and their way of speaking made the man unable to understand what they wanted, and he said „What? 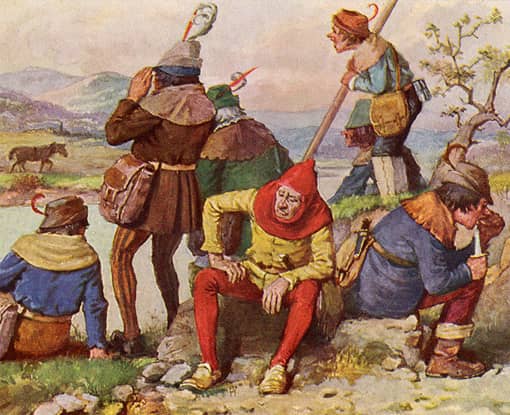 what?“ in the way people speak in the neighborhood of Treves. Master Schulz thought he was saying, „Wade, wade through the water,“ and as he was the first, began to set out and went into the moselle. It was not long before he sank in the mud and the deep waves which drove against him, but his hat was blown on the opposite shore by the wind, and a frog sat down beside it, and croaked „Wat, wat, wat.“ 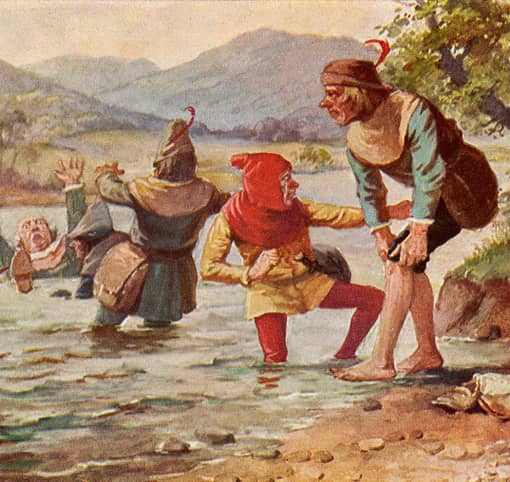 The other six on the opposite side heard that, and said, „Oho, comrades, Master Schulz is calling us; if he can wade across, why cannot we?“ So they all jumped into the water together in a great hurry, and were drowned, and thus one frog took the lives of all six of them, and not one of the Swabian allies ever reached home again.