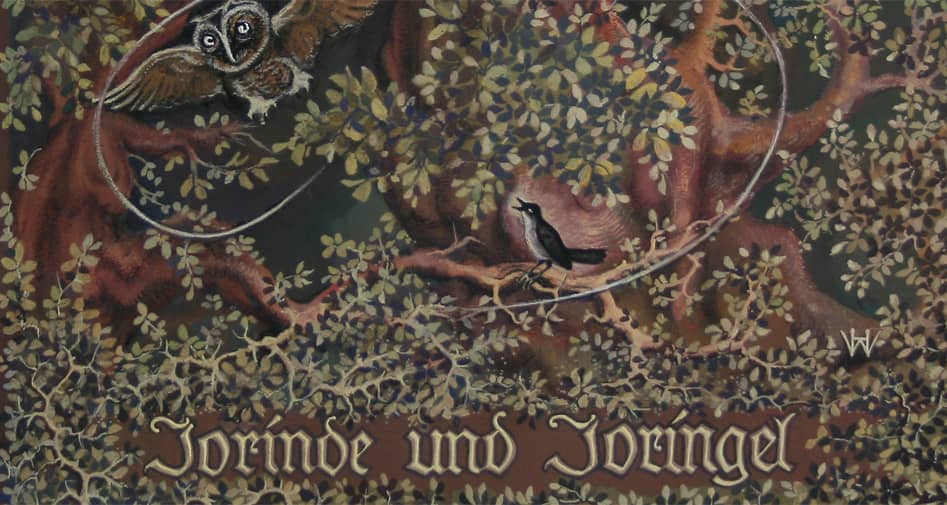 Jorinde and Joringel - Fairy Tale by the Brothers Grimm

There was once an old castle in the midst of a large and thick forest, and in it an old woman who was a witch dwelt all alone. In the day-time she changed herself into a cat or a screech-owl, but in the evening she took her proper shape again as a human being. She could lure wild beasts and birds to her, and then she killed and boiled and roasted them. 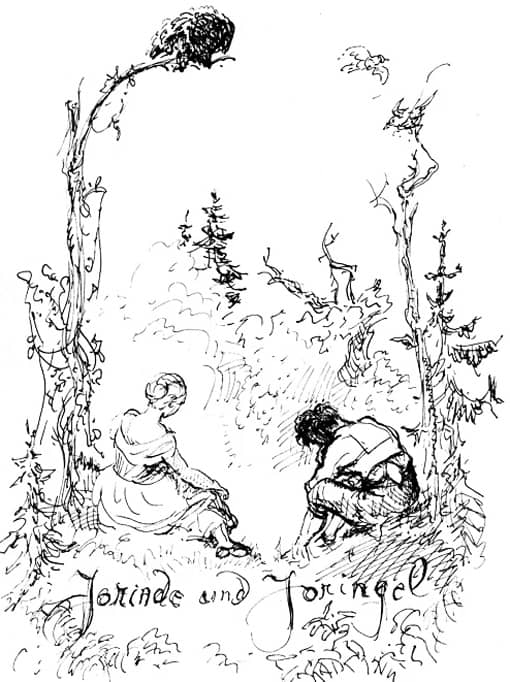 If any one came within one hundred paces of the castle he was obliged to stand still, and could not stir from the place until she bade him be free. But whenever an innocent maiden came within this circle, she changed her into a bird, and shut her up in a wicker-work cage, and carried the cage into a room in the castle. She had about seven thousand cages of rare birds in the castle. 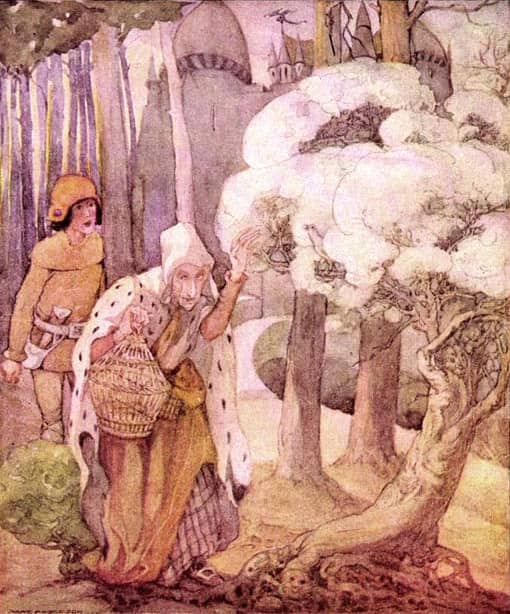 Now, there was once a maiden who was called Jorinda, who was fairer than all other girls. She and a handsome youth named Joringel had promised to marry each other. They were still in the days of betrothal, and their greatest happiness was being together. One day in order that they might be able to talk together in quiet they went for a walk in the forest. „Take care,“ said Joringel, „that you do not go too near the castle.“

It was a beautiful evening; the sun shone brightly between the trunks of the trees into the dark green of the forest, and the turtle-doves sang mournfully upon the young boughs of the birch-trees. 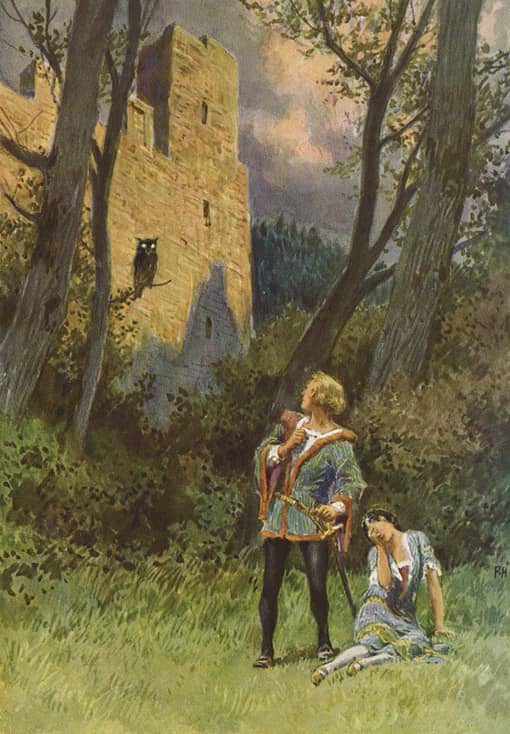 Then they looked around them, and were quite at a loss, for they did not know by which way they should go home. The sun was still half above the mountain and half set.

Joringel looked through the bushes, and saw the old walls of the castle close at hand. He was horror-stricken and filled with deadly fear. Jorinda was singing,

Joringel could not move: he stood there like a stone, and could neither weep nor speak, nor move hand or foot.

The sun had now set. The owl flew into the thicket, and directly afterwards there came out of it a crooked old woman, yellow and lean, with large red eyes and a hooked nose, the point of which reached to her chin. She muttered to herself, caught the nightingale, and took it away in her hand.

Joringel could neither speak nor move from the spot; the nightingale was gone. 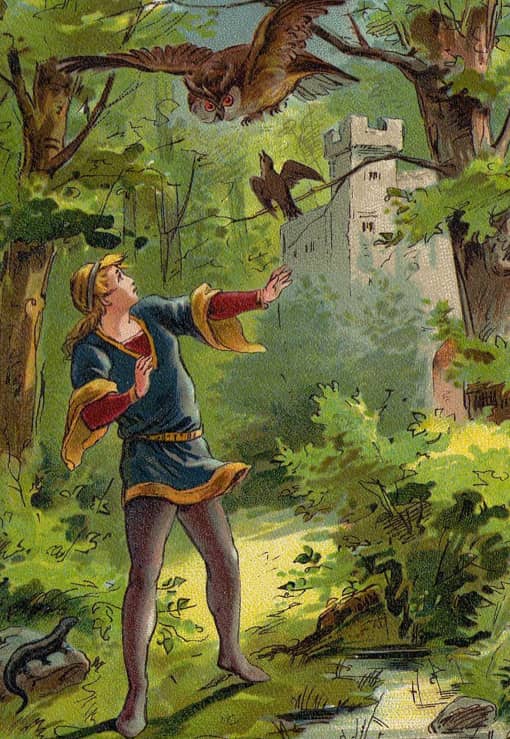 At last the woman came back, and said in a hollow voice, „Greet thee, Zachiel. If the moon shines on the cage, Zachiel, let him loose at once.“ Then Joringel was freed. He fell on his knees before the woman and begged that she would give him back his Jorinda, but she said that he should never have her again, and went away. He called, he wept, he lamented, but all in vain,“Ah, what is to become of me?“

Joringel went away, and at last came to a strange village; there he kept sheep for a long time. He often walked round and round the castle, but not too near to it. At last he dreamt one night that he found a blood-red flower, in the middle of which was a beautiful large pearl; that he picked the flower and went with it to the castle, and that everything he touched with the flower was freed from enchantment; he also dreamt that by means of it he recovered his Jorinda.

In the morning, when he awoke, he began to seek over hill and dale if he could find such a flower. He sought until the ninth day, and then, early in the morning, he found the blood-red flower. In the middle of it there was a large dew-drop, as big as the finest pearl.

Day and night he journeyed with this flower to the castle. When he was within a hundred paces of it he was not held fast, but walked on to the door. Joringel was full of joy; he touched the door with the flower, and it sprang open. He walked in through the courtyard, and listened for the sound of the birds. At last he heard it. He went on and found the room from whence it came, and there the witch was feeding the birds in the seven thousand cages.

When she saw Joringel she was angry, very angry, and scolded and spat poison and gall at him, but she could not come within two paces of him. 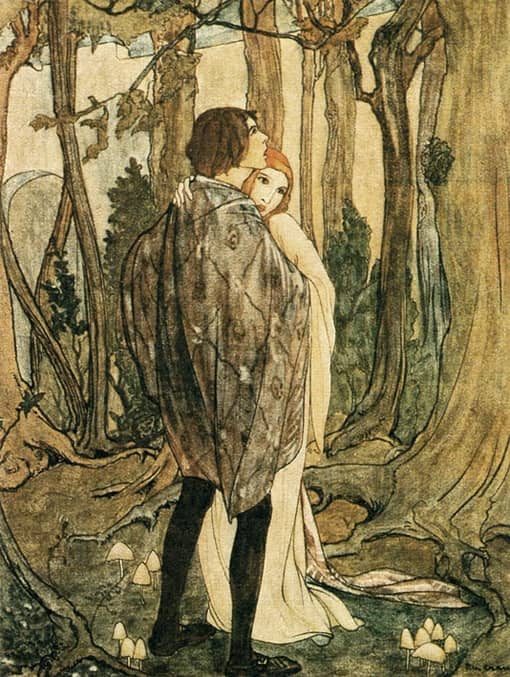 He did not take any notice of her, but went and looked at the cages with the birds; but there were many hundred nightingales, how was he to find his Jorinda again?

Just then he saw the old woman quietly take away a cage with a bird in it, and go towards the door.

Swiftly he sprang towards her, touched the cage with the flower, and also the old woman. She could now no longer bewitch any one; and Jorinda was standing there, clasping him round the neck, and she was as beautiful as ever!

Questions, comments or experience reports?
« The Thief and His Master
The three children of fortune »
Search
Fairy tale of the month