The Thief and His Master 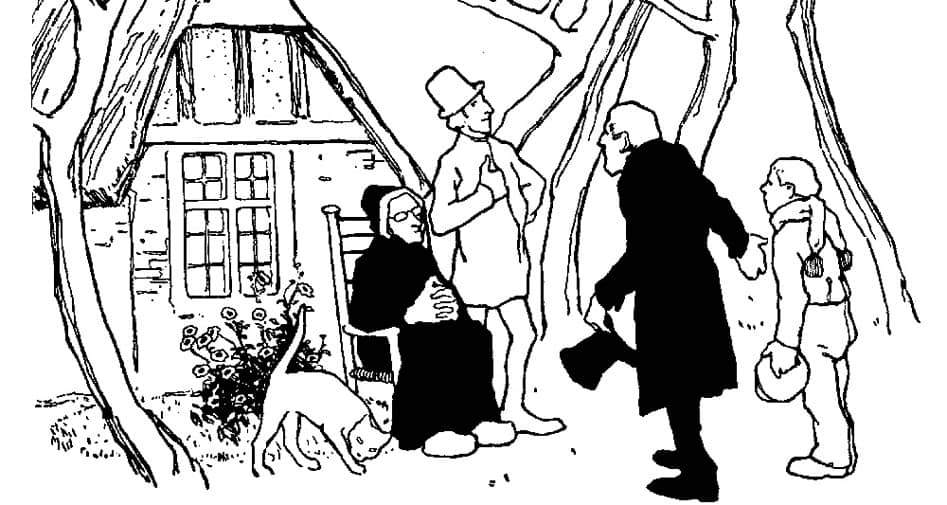 The Thief and His Master - Fairy Tale by the Brothers Grimm

Hans wished to put his son to learn a trade, so he went into the church and prayed to our Lord God to know which would be most advantageous for him. Then the clerk got behind the altar, and said, „Thieving, thieving.“ On this Hans goes back to his son, and tells him he is to learn thieving, and that the Lord God had said so. So he goes with his son to seek a man who is acquainted with thieving. They walk a long time and come into a great forest, where stands a little house with an old woman in it. Hans says, „Do you know of a man who is acquainted with thieving?“ – „You can learn that here quite well,“ says the woman, „my son is a master of it.“ So he speaks with the son, and asks if he knows thieving really well? The master-thief says, „I will teach him well. Come back when a year is over, and then if you recognize your son, I will take no payment at all for teaching him; but if you don’t know him, you must give me two hundred thalers.“

The father goes home again, and the son learns witchcraft and thieving, thoroughly. When the year is out, the father is full of anxiety to know how he is to contrive to recognize his son. As he is thus going about in his trouble, he meets a little dwarf, who says, „Man, what ails you, that you are always in such trouble?“

„Oh,“ says Hans, „a year ago I placed my son with a master-thief who told me I was to come back when the year was out, and that if I then did not know my son when I saw him, I was to pay two hundred thalers; but if I did know him I was to pay nothing, and now I am afraid of not knowing him and can’t tell where I am to get the money.“ Then the dwarf tells him to take a small basket of bread with him, and to stand beneath the chimney. „There on the cross-beam is a basket, out of which a little bird is peeping, and that is your son.“

Hans goes thither, and throws a little basket full of black bread in front of the basket with the bird in it, and the little bird comes out, and looks up. „Hollo, my son, art thou here?“ says the father, and the son is delighted to see his father, but the master-thief says, „The devil must have prompted you, or how could you have known your son?“ – „Father, let us go,“ said the youth.

Then the father and son set out homeward. On the way a carriage comes driving by. Hereupon the son says to his father, „I will change myself into a large greyhound, and then you can earn a great deal of money by me.“ Then the gentleman calls from the carriage, „My man, will you sell your dog?“ – „Yes,“ says the father. „How much do you want for it?“ – „Thirty thalers.“ – „Eh, man, that is a great deal, but as it is such a very fine dog I will have it.“ The gentleman takes it into his carriage, but when they have driven a little farther the dog springs out of the carriage through the window, and goes back to his father, and is no longer a greyhound.

They go home together. Next day there is a fair in the neighboring town, so the youth says to his father, „I will now change myself into a beautiful horse, and you can sell me; but when you have sold me, you must take off my bridle, or I cannot become a man again.“ Then the father goes with the horse to the fair, and the master-thief comes and buys the horse for a hundred thalers, but the father forgets, and does not take off the bridle. So the man goes home with the horse, and puts it in the stable. When the maid crosses the threshold, the horse says, „Take off my bridle, take off my bridle.“ Then the maid stands still, and says, „What, canst thou speak?“ So she goes and takes the bridle off, and the horse becomes a sparrow, and flies out at the door, and the wizard becomes a sparrow also, and flies after him. Then they come together and cast lots, but the master loses, and betakes himself to the water and is a fish. Then the youth also becomes a fish, and they cast lots again, and the master loses. So the master changes himself into a cock, and the youth becomes a fox, and bites the master’s head off, and he died and has remained dead to this day.