The Hut in the Forest 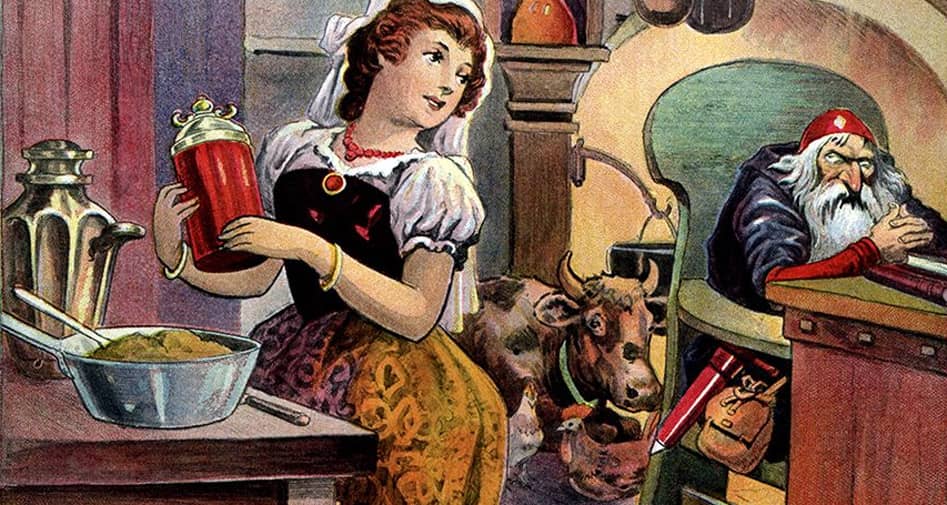 The Hut in the Forest - Fairy Tale by the Brothers Grimm

A poor wood-cutter lived with his wife and three daughters in a little hut on the edge of a lonely forest. One morning as he was about to go to his work, he said to his wife, „Let my dinner be brought into the forest to me by my eldest daughter, or I shall never get my work done, and in order that she may not miss her way,“ he added, „I will take a bag of millet with me and strew the seeds on the path.“ When, therefore, the sun was just above the center of the forest, the girl set out on her way with a bowl of soup, but the field-sparrows, and wood-sparrows, larks and finches, blackbirds and siskins had picked up the millet long before, and the girl could not find the track. Then trusting to chance, she went on and on, until the sun sank and night began to fall. The trees rustled in the darkness, the owls hooted, and she began to be afraid. Then in the distance she perceived a light which glimmered between the trees. „There ought to be some people living there, who can take me in for the night,“ thought she, and went up to the light. It was not long before she came to a house the windows of which were all lighted up. 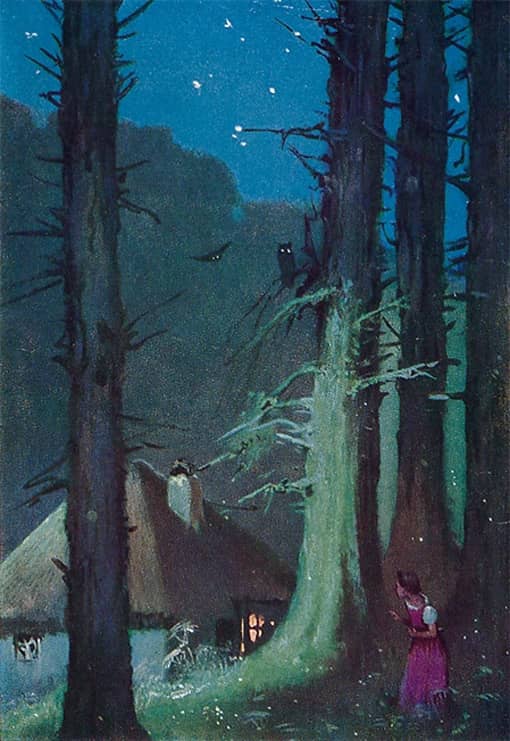 She knocked, and a rough voice from inside cried, „Come in.“ The girl stepped into the dark entrance, and knocked at the door of the room. „Just come in,“ cried the voice, and when she opened the door, an old gray-haired man was sitting at the table, supporting his face with both hands, and his white beard fell down over the table almost as far as the ground. By the stove lay three animals, a hen, a cock, and a brindled cow. The girl told her story to the old man, and begged for shelter for the night. The man said:

„Duks,“ answered the animals, and that must have meant, „We are willing,“ for the old man said, „Here you shall have shelter and food, go to the fire, and cook us our supper.“ The girl found in the kitchen abundance of everything, and cooked a good supper, but had no thought of the animals. She carried the full dishes to the table, seated herself by the gray-haired man, ate and satisfied her hunger. When she had had enough, she said, „But now I am tired, where is there a bed in which I can lie down, and sleep?“ The animals replied:

Then said the old man, „Just go upstairs, and thou wilt find a room with two beds, shake them up, and put white linen on them, and then I, too, will come and lie down to sleep.“ 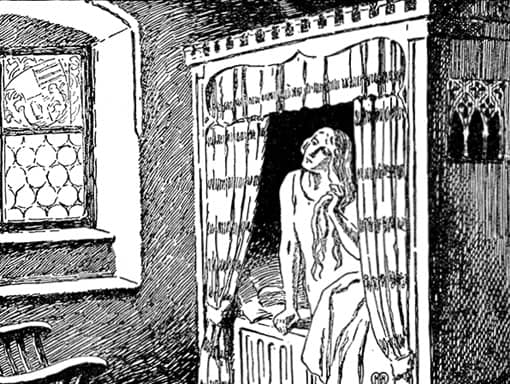 The girl went up, and when she had shaken the beds and put clean sheets on, she lay down in one of them without waiting any longer for the old man. After some time, however, the gray-haired man came, took his candle, looked at the girl and shook his head. When he saw that she had fallen into a sound sleep, he opened a trap-door, and let her down into the cellar. Late at night the wood-cutter came home, and reproached his wife for leaving him to hunger all day.

„It is not my fault,“ she replied, „the girl went out with your dinner, and must have lost herself, but she is sure to come back to-morrow.“ The wood-cutter, however, arose before dawn to go into the forest, and requested that the second daughter should take him his dinner that day. „I will take a bag with lentils,“ said he; „the seeds are larger than millet, the girl will see them better, and can’t lose her way.“ At dinner-time, therefore, the girl took out the food, but the lentils had disappeared. The birds of the forest had picked them up as they had done the day before, and had left none. The girl wandered about in the forest until night, and then she too reached the house of the old man, was told to go in, and begged for food and a bed. The man with the white beard again asked the animals,

The animals again replied „Duks,“ and everything happened just as it had happened the day before. The girl cooked a good meal, ate and drank with the old man, and did not concern herself about the animals, and when she inquired about her bed they answered,

„Thou hast eaten with him, Thou hast drunk with him,
Thou hast had no thought for us,
To find out for thyself where thou canst pass the night.“

When she was asleep the old man came, looked at her, shook his head, and let her down into the cellar. On the third morning the wood-cutter said to his wife, „Send our youngest child out with my dinner to-day, she has always been good and obedient, and will stay in the right path, and not run about after every wild humble-bee, as her sisters did.“ The mother did not want to do it, and said, „Am I to lose my dearest child, as well?“

„Have no fear,‘ he replied, „the girl will not go astray; she is too prudent and sensible; besides I will take some peas with me, and strew them about. They are still larger than lentils, and will show her the way.“ But when the girl went out with her basket on her arm, the wood-pigeons had already got all the peas in their crops, and she did not know which way she was to turn. She was full of sorrow and never ceased to think how hungry her father would be, and how her good mother would grieve, if she did not go home. At length when it grew dark, she saw the light and came to the house in the forest. She begged quite prettily to be allowed to spend the night there, and the man with the white beard once more asked his animals,

„Duks,“ said they. Then the girl went to the stove where the animals were lying, and petted the cock and hen, and stroked their smooth feathers with her hand, and caressed the brindled cow between her horns, and when, in obedience to the old man’s orders, she had made ready some good soup, and the bowl was placed upon the table, she said, „Am I to eat as much as I want, and the good animals to have nothing? 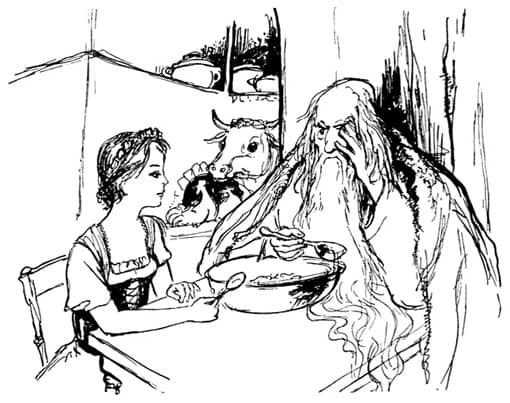 Outside is food in plenty, I will look after them first.“ So she went and brought some barley and stewed it for the cock and hen, and a whole armful of sweet- smelling hay for the cow. „I hope you will like it, dear animals,“ said she, „and you shall have a refreshing draught in case you are thirsty.“ Then she fetched in a bucketful of water, and the cock and hen jumped on to the edge of it and dipped their beaks in, and then held up their heads as the birds do when they drink, and the brindled cow also took a hearty draught. 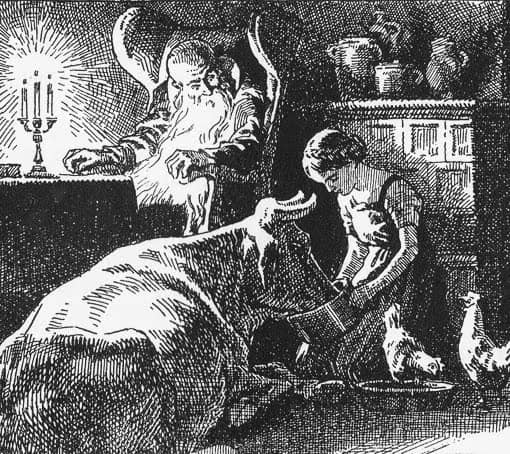 When the animals were fed, the girl seated herself at the table by the old man, and ate what he had left. It was not long before the cock and the hen began to thrust their heads beneath their wings, and the eyes of the cow likewise began to blink. Then said the girl, „Ought we not to go to bed?“

Then the maiden went upstairs, shook the feather-beds, and laid clean sheets on them, and when she had done it the old man came and lay down on one of the beds, and his white beard reached down to his feet. The girl lay down on the other, said her prayers, and fell asleep. She slept quietly till midnight, and then there was such a noise in the house that she awoke. There was a sound of cracking and splitting in every corner, and the doors sprang open, and beat against the walls. The beams groaned as if they were being torn out of their joints, it seemed as if the staircase were falling down, and at length there was a crash as if the entire roof had fallen in. As, however, all grew quiet once more, and the girl was not hurt, she stayed quietly lying where she was, and fell asleep again.

But when she woke up in the morning with the brilliancy of the sunshine, what did her eyes behold? She was lying in a vast hall, and everything around her shone with royal splendor; on the walls, golden flowers grew up on a ground of green silk, the bed was of ivory, and the canopy of red velvet, and on a chair close by, was a pair of shoes embroidered with pearls. The girl believed that she was in a dream, but three richly clad attendants came in, and asked what orders she would like to give? „If you will go,“ she replied, „I will get up at once and make ready some soup for the old man, and then I will feed the pretty little hen, and the cock, and the beautiful brindled cow.“ She thought the old man was up already, and looked round at his bed; he, however, was not lying in it, but a stranger.

And while she was looking at him, and becoming aware that he was young and handsome, he awoke, sat up in bed, and said, „I am a King’s son, and was bewitched by a wicked witch, and made to live in this forest, as an old gray-haired man; no one was allowed to be with me but my three attendants in the form of a cock, a hen, and a brindled cow. The spell was not to be broken until a girl came to us whose heart was so good that she showed herself full of love, not only towards mankind, but towards animals – and that thou hast done, and by thee at midnight we were set free, and the old hut in the forest was changed back again into my royal palace.“ And when they had arisen, the King’s son ordered the three attendants to set out and fetch the father and mother of the girl to the marriage feast. „But where are my two sisters?“ inquired the maiden. „I have locked them in the cellar, and to-morrow they shall be led into the forest, and shall live as servants to a charcoal-burner, until they have grown kinder, and do not leave poor animals to suffer hunger.“