The Three Little Men in the Wood 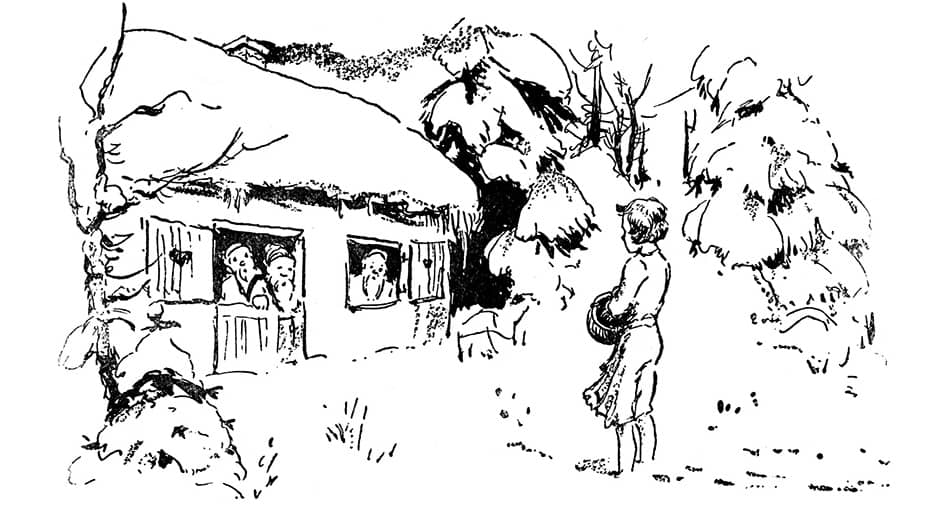 There was once a man, whose wife was dead, and a woman, whose husband was dead; and the man had a daughter, and so had the woman. The girls were acquainted with each other, and used to play together sometimes in the woman’s house. So the woman said to the man’s daughter, „Listen to me, tell your father that I will marry him, and then you shall have milk to wash in every morning and wine to drink, and my daughter shall have water to wash in and water to drink.“ The girl went home and told her father what the woman had said.

The man said, „What shall I do! Marriage is a joy, and also a torment.“ At last, as he could come to no conclusion, he took off his boot, and said to his daughter, „Take this boot, it has a hole in the sole; go up with it into the loft, hang it on the big nail and pour water in it. If it holds water, I will once more take to me a wife; if it lets out the water, so will I not.“

The girl did as she was told, but the water held the hole together, and the boot was full up to the top. So she went and told her father how it was. And he went up to see with his own eyes, and as there was no mistake about it, he went to the widow and courted her, and then they had the wedding.

Once in winter, when it was freezing hard, and snow lay deep on hill and valley, the woman made a frock out of paper, called her stepdaughter, and said, „Here, put on this frock, go out into the wood and fetch me a basket of strawberries; I have a great wish for some.“

„Oh dear,“ said the girl, „there are no strawberries to be found in winter; the ground is frozen, and the snow covers everything. And why should I go in the paper frock? it is so cold out of doors that one’s breath is frozen; the wind will blow through it, and the thorns will tear it off my back!“

„How dare you contradict me!“ cried the stepmother, „be off, and don’t let me see you again till you bring me a basket of strawberries.“ Then she gave her a little piece of hard bread, and said, „That will do for you to eat during the day,“ and she thought to herself, „She is sure to be frozen or starved to death out of doors, and I shall never set eyes on her again.“

So the girl went obediently, put on the paper frock, and started out with the basket. The snow was lying everywhere, far and wide, and there was not a blade of green to be seen. When she entered the wood she saw a little house with three little men peeping out of it. 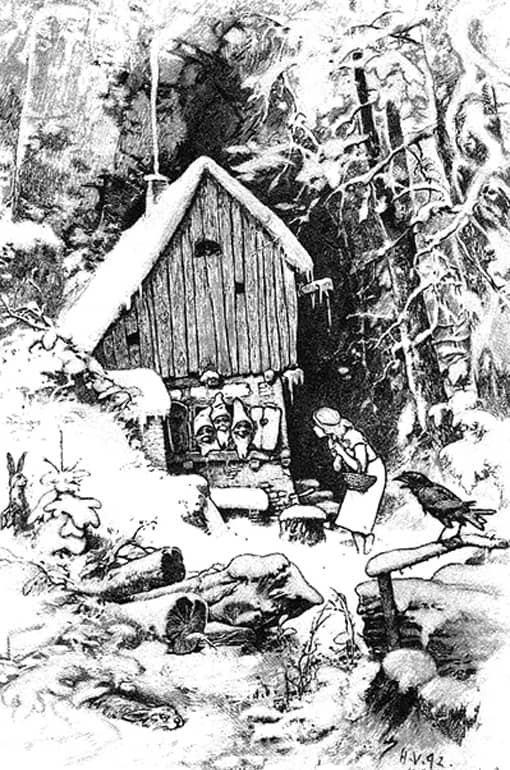 She wished them good day, and knocked modestly at the door. They called her in, and she came into the room and sat down by the side of the oven to warm herself and eat her breakfast. The little men said, „Give us some of it.“

„Willingly,“ answered she, breaking her little piece of bread in two, and giving them half. They then said, „What are you doing here in the wood this winter time in your little thin frock?“

„Oh,“ answered she, „I have to get a basket of strawberries, and I must not go home without them.“ When she had eaten her bread they gave her a broom, and told her to go and sweep the snow away from the back door. When she had gone outside to do it the little men talked among themselves about what they should do for her, as she was so good and pretty, and had shared her bread with them. Then the first one said, „She shall grow prettier every day.“ The second said, „Each time she speaks a piece of gold shall fall from her mouth.“ The third said, „A king shall come and take her for his wife.“ 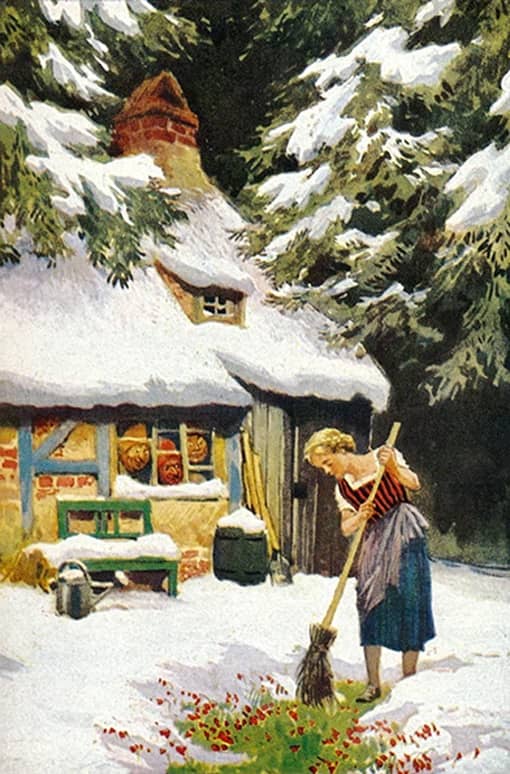 In the meanwhile the girl was doing as the little men had told her, and had cleared the snow from the back of the little house, and what do you suppose she found? fine ripe strawberries, showing dark red against the snow! Then she joyfully filled her little basket full, thanked the little men, shook hands with them all, and ran home in haste to bring her stepmother the thing she longed for. As she went in and said, „Good evening,“ a piece of gold fell from her mouth at once. Then she related all that had happened to her in the wood, and at each word that she spoke gold pieces fell out of her mouth, so that soon they were scattered all over the room. 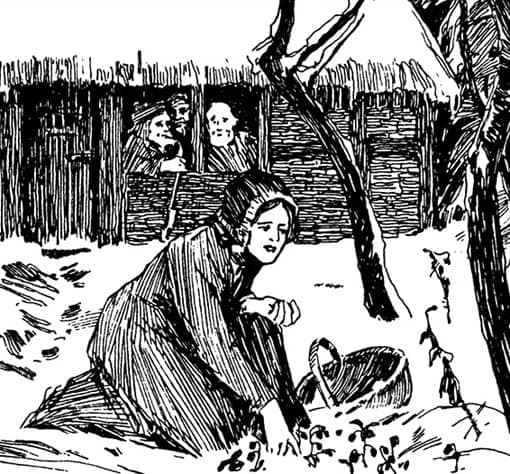 „Just look at her pride and conceit!“ cried the stepsister, „throwing money about in this way!“ but in her heart she was jealous because of it, and wanted to go too into the wood to fetch strawberries. But the mother said, „No, my dear little daughter, it is too cold, you will be frozen to death.“ But she left her no peace, so at last the mother gave in, got her a splendid fur coat to put on, and gave her bread and butter and cakes to eat on the way.

The girl went into the wood and walked straight up to the little house. The three little men peeped out again, but she gave them no greeting, and without looking round or taking any notice of them she came stumping into the room, sat herself down by the oven, and began to eat her bread and butter and cakes. 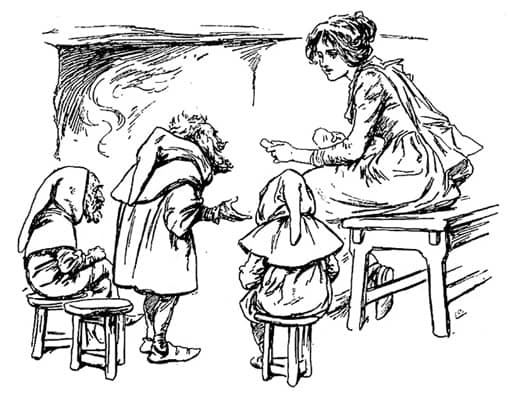 „Give us some of that,“ cried the little men, but she answered, „I’ve not enough for myself; how can I give away any?“ Now when she had done with her eating, they said, „Here is a broom, go and sweep all clean by the back door.“

„Oh, go and do it yourselves,“ answered she; „I am not your housemaid.“ But when she saw that they were not going to give her anything, she went out to the door. Then the three little men said among themselves, „What shall we do to her, because she is so unpleasant, and has such a wicked jealous heart, grudging everybody everything?“ The first said, „She shall grow uglier every day.“ The second said, „Each time she speaks a toad shall jump out of her mouth at every word.“ The third said, „She shall die a miserable death.“

The girl was looking outside for strawberries, but as she found none, she went sulkily home. And directly she opened her mouth to tell her mother what had happened to her in the wood a toad sprang out of her mouth at each word, so that every one who came near her was quite disgusted.

The stepmother became more and more set against the man’s daughter, whose beauty increased day by day, and her only thought was how to do her some injury. So at last she took a kettle, set it on the fire, and scalded some yarn in it. When it was ready she hung it over the poor girl’s shoulder, and gave her an axe, and she was to go to the frozen river and break a hole in the ice, and there to rinse the yarn. She obeyed, and went and hewed a hole in the ice, and as she was about it there came by a splendid coach, in which the King sat. The coach stood still, and the King said, „My child, who art thou, and what art thou doing there?“

She answered, „I am a poor girl, and am rinsing yarn.“ Then the King felt pity for her, and as he saw that she was very beautiful, he said, „Will you go with me?“

„Oh yes, with all my heart,“ answered she; and she felt very glad to be out of the way of her mother and sister.

So she stepped into the coach and went off with the King; and when they reached his castle the wedding was celebrated with great splendour, as the little men in the wood had foretold. At the end of a year the young Queen had a son; and as the stepmother had heard of her great good fortune she came with her daughter to the castle, as if merely to pay the King and Queen a visit. One day, when the King had gone out, and when nobody was about, the bad woman took the Queen by the head, and her daughter took her by the heels, and dragged her out of bed, and threw her out of the window into a stream that flowed beneath it. Then the old woman put her ugly daughter in the bed, and covered her up to her chin.

When the King came back, and wanted to talk to his wife a little, the old woman cried, „Stop, stop! she is sleeping nicely; she must be kept quiet to day.“ The King dreamt of nothing wrong, and came again the next morning; and as he spoke to his wife, and she answered him, there jumped each time out of her mouth a toad instead of the piece of gold as heretofore. Then he asked why that should be, and the old woman said it was because of her great weakness, and that it would pass away.

But in the night, the boy who slept in the kitchen saw how something in the likeness of a duck swam up the gutter, and said,

„My King, what mak’st thou? Sleepest thou, or wak’st thou?“

But there was no answer. Then it said,

„What cheer my two guests keep they?“

„In bed all soundly sleep they.“

„And my little baby, how does he?“

„He sleeps in his cradle quietly.“

Then the duck took the shape of the Queen and went to the child, and gave him to drink, smoothed his little bed, covered him up again, and then, in the likeness of a duck, swam back down the gutter. In this way she came two nights, and on the third she said to the kitchen-boy, „Go and tell the King to brandish his sword three times over me on the threshold!“ Then the kitchen-boy ran and told the King, and he came with his sword and brandished it three times over the duck, and at the third time his wife stood before him living, and hearty, and sound, as she had been before.

The King was greatly rejoiced, but he hid the Queen in a chamber until the Sunday came when the child was to be baptized. And after the baptism he said, „What does that person deserve who drags another out of; bed and throws him in the water?“